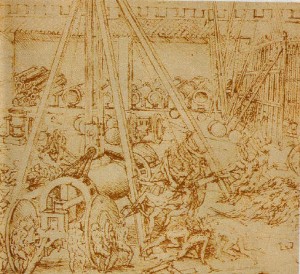 A one-pound projectile traveling at the speed of sound with 10 times the kinetic energy of an AK-47 bullet is not a toy. This experiment was performed under carefully designed and controlled conditions. 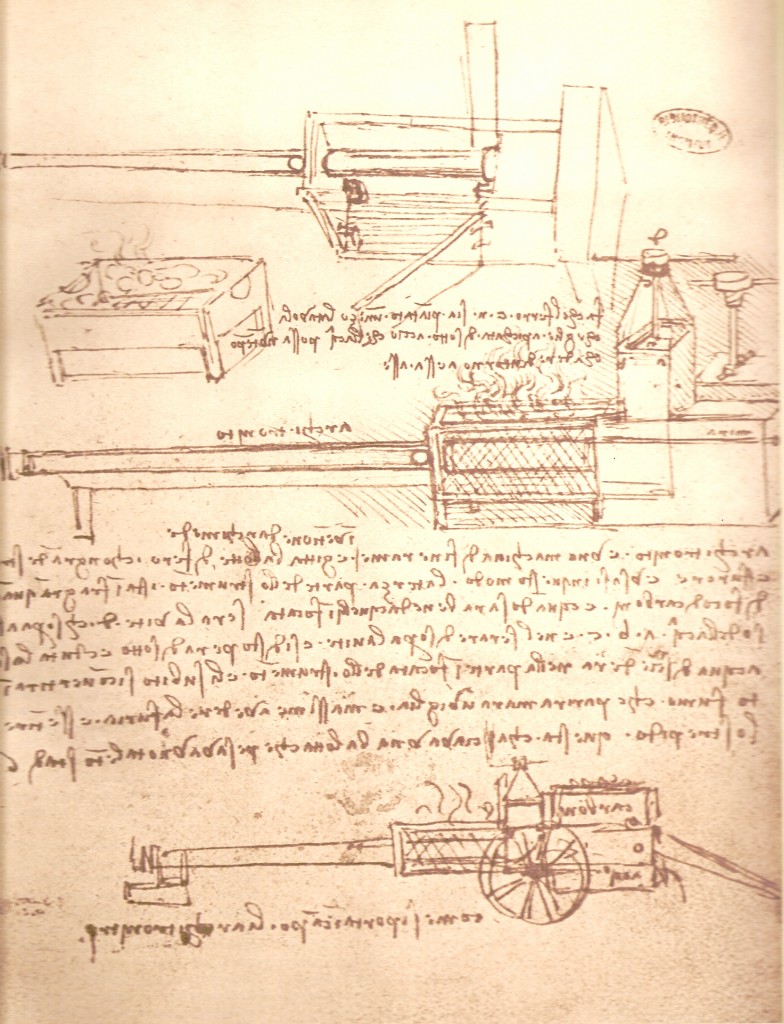 In episode 54 the MythBusters took on the myth of Archimedes’s steam cannon, and after a gentle lob of a few feet, the myth was busted. A large boiler-driven cannon was used for the show’s finale.

The drawing has been interpreted as a direct injection concept, where water rapidly sprays into a hot breech and the resulting flash of steam launches the projectile.

But, some back-of-the-envelope calculations suggest otherwise. A 540 °C  (1000 °F) copper breech can provide a heat flux of roughly 100,000 kiloWatts per square meter to water that is in direct contact with its surface. And if water can be sprayed onto the breech in a uniform 1mm thick layer, 2,000 kiloJoules of energy per square meter of surface will produce 400 PSI steam—a pressure that would generate a reasonable projectile velocity.
The pressurized steam must be generated quickly, before the projectile exits the cannon, perhaps in 0.005 seconds. But at 100,000 kiloWatts per square meter, the breech can only provide around 500 kiloJoules per square meter in such a short time, not nearly enough energy to produce high-pressure steam.

Our conclusion? Direct injection is not likely to produce much more than a burp (.mov, 0.23 Mb).

In 1981, Sakkas recreated Archimedes’s steam cannon and incorporated a wood board into the concept to hold the projectile in place while some pressure developed, although da Vinci’s drawing does not show a similar feature. Even so, this produced a fairly low velocity projectile (perhaps 70 mph) that traveled only 50 meters.

In fact, the solution is so simple, effective, and dangerous that we have decided not to disclose the details.

The design specifications and calculated performance estimates for our small-scale cannon were:

Test day began at 6:05 AM with the MythBusters, approximately 30 students and a two-hour bus trip from MIT to the test site, complete with breakfast and a showing of episode 54.
For safety reasons, the cannon was placed below ground in a cinder block and steel lined fire pit.
We observed the firings, which were aimed directly into a sandy berm, on remote monitors behind a hill 150 feet away from the cannon.
After explaining the design, two different cannons were tested.

Two rounds were fired from the first cannon—a design simpler than da Vinci’s but using the same concept.

Then, a second cannon that mirrored da Vinci’s drawing was tested.

Both designs performed comparably.
The time needed to reload and shoot was roughly 2 minutes.

High-speed camera footage showed that the muzzle velocity was over 300 m/s (670 mph)!
The shell’s kinetic energy was calculated to be approximately 23,000 Joules — 1.3 to 1.8 times the energy of a 0.50 BMG caliber bullet fired from a M2 machine gun.
On impact, the thick nose of the shell was driven into its body and it was filled with soil, packed to the consistency of concrete. Our conclusion?

We can’t say if Archimedes did it, but this small-scale test shows that a simple, powerful steam cannon could probably have been made using technology of his era.

And in tribute to da Vinci (since they are his drawings after all),
Mito Pericoloso!

I would like to say that Sakkas and Leonardos are our greater ancestors and they were capable of getting better results from these methods.

Archimedes is Sakkas and Leonardos greater ancestor and His Steam Cannon was 5 times larger than Sakkas.

Most likely the manuscripts for this Greater Technology and so many more was lost to the destruction of the Library of Alexandria.