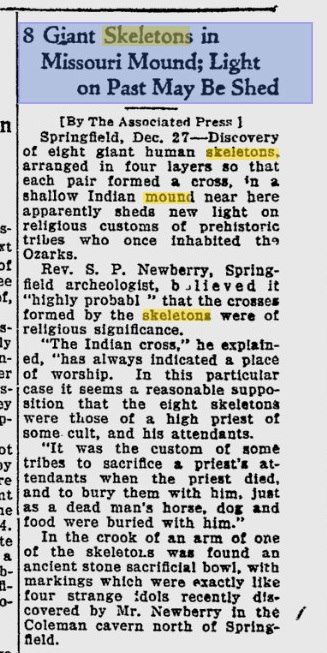 “Springfield-Discovery of eight giant human skeletons, arranged in four layers so that each pair formed a cross, in a shallow Indian mound near here apparently sheds light on religious customs of prehistoric tribes who once inhabited the Ozarks. Rev…. S. P. Newberry, Springfield archaeologist, believed it, “highly probable” that the crosses formed by the skeletons were of religious significance. “The Indian cross,” he explained, “has always indicated a place of worship. In this particular case it seems a reasonable supposition that the eight skeletons were those of a high priest of some cult and his attendants. “it was the custom of some tribes to sacrifice a priest’s attendants when the priest died and to bury them with him, just as a dead man’s horse, dog and food were buried with him.” In the crook of an arm one of the skeletons was found an ancient stone sacrificial bowl, with markings which were exactly like four strange idols recently discovered by Mr. Newberry in the Coleman cavern north of Springfield.”