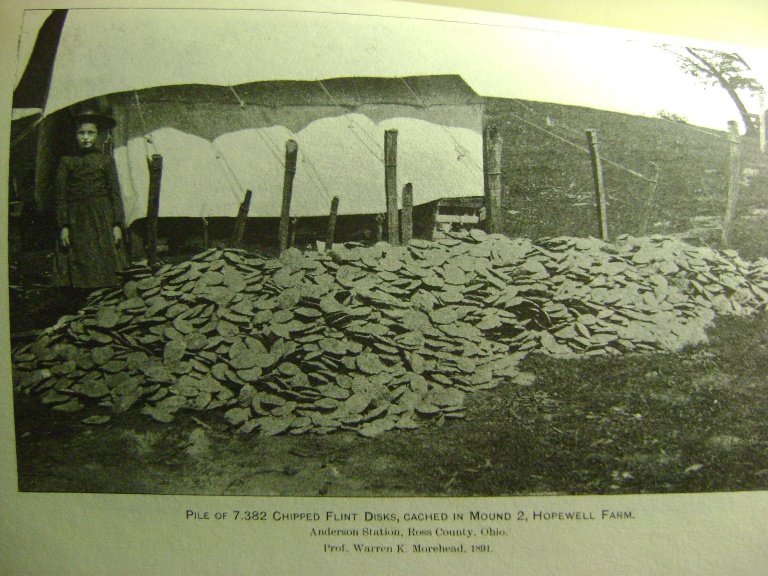 The Crib Mound is located in Huf Township, Spencer County, Indiana on the north bank of the Ohio River. Burials were found in the shell mound from the Archaic to Woodland Periods. “Editors Note” – the several so called bannerstones and some of the objects from bone and antler, illustrated by the author, are somewhat reminiscent of types found and illustrated by Clarence B. Moore at the Indian Knoll site in Ohio County, Kentucky in 1915-1916.

The foremost expert on the Crib Mound is without a doubt Art Gerber, a true living legend. 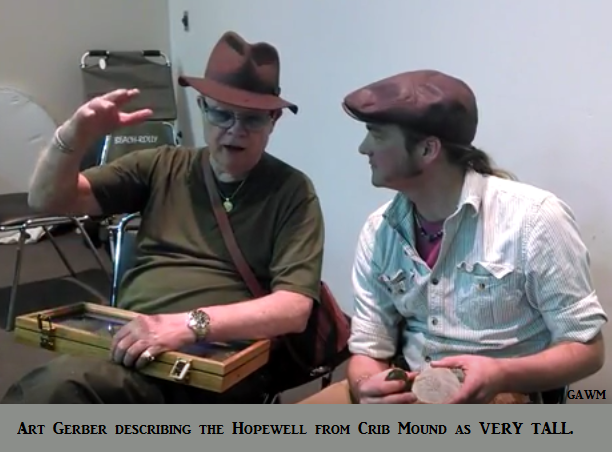 In an interview from Chase Pipes at the Collinsville Indian Artifact Show, at that show he had stated that he had been collecting Indian artifacts for 55 years. Back in the 60’s Art Gerber lived next to the Crib Mound. Art has found the largest cache of Indian artifacts in the continental United States. Art Gerber came across a bank of Hopewell currency, he states that the Hopewell culture which is about 2000 years old.

Art Gerber – “They were a real sanguinary people, intelligent, had a shaman or leader, and probably a lot smarter than other people and they were well developed, and very tall, comparatively speaking to the other Indians.”

Chase Pipes – “Really, so there is archaeological evidence that shows that compared to the rest of the native groups in this part of the Ohio River Valley their stature because of a better diet, they were much taller.

There are also two beehive mound Hopewell structures, within walking distance of this site. They have never been dug, they still exist. Art Gerber: “I think the Hopewell Elite are probably buried there.

So even the experts like Art Gerber admits that that the Hopewell from the Crib Mound were very tall, “seven footers”. So if the Bee mounds are indeed tombs of the the Hopewell Elite, we expect them to be consistently eight or nine feet in height. The Hopewell elite, these giants are still present in their mounds. For the critics: Here are the bones!