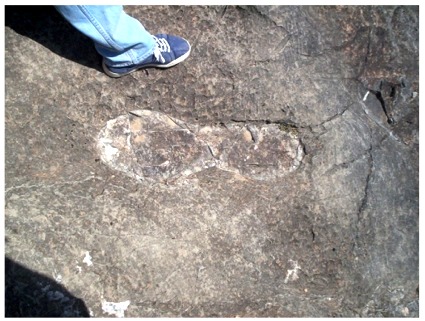 There Were Giants in the Earth in Those Days:
Giant Humans, Dinosaurs and Ancient Civilizations of Spain……..Page 28

Some years ago, in 2004 to be exact, I went for the first time to visit a well-known place within the Valencian archaeological tourist circuit. It is the route of an aqueduct through almost 30 kilometers which meanders through various localities: Tuejar, Chelva, Streets, Dome�o and Losa of the Bishop, all in the region of the Highlands, in the Province of Valencia.

The track of the Giant

Following the course of the tunnels, it took a little while to come to their end and one ends up coming to the open mountain. Some 300 feet below as we made our way down I found my friend Salva and took the photos that speak for themselves;

Soon after finding the previous tracks in the platform, I notfied the mayor of the locality so that they were reviewed by the archaeologists who work in that area, but the location of the giant footprint I kept to myself, thus I have (or almost) the security that the next time I go there that I will still be able to see it and it will still be there.

Obviously, our history needs a deep revision, and not only in as much to the existence of giants, also to the coexistence of humans with dinosaurs and the possession of technical knowledge in antediluvian times, since time after time there is found more and more evidence of this that appears in every part of this world.