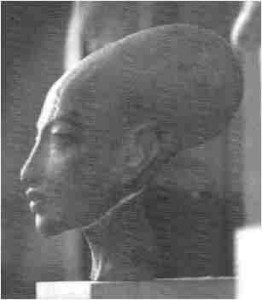 This bust is located at the Cairo Museum

It is possible that Smenkhkare was succeeded by Smenkhkare’s younger relative Tutankhamun, who was the last of that dynasty.

The evidence is lacking of Smenkhkare’s life, and where he was buried, there is an mystery siurrounding hum and the of tomb KV 55 on the West Bank at Luxor (ancient Thebes).Their story seems to be thoroughly  intertwined. Ii is highly possible that the mummy that was found at the tomb is Smenkhkare, which would suggest that he died around the age of 20 to 25. Because of the heresy of the Amarna kings of Egypt, much of the evidence in KV 55 were have been destroyed. The main factor o r method that has led egyptologists to think that the this mummy is indeed Smenkhkare is simply by the  process of elimination.

This skull to the left may indeed be Smenhkare’s skull, notice the elongation which would be more pronounced if the skull was not at an angle. The skull is strong, robust, with more mature characteristics than today’s average.