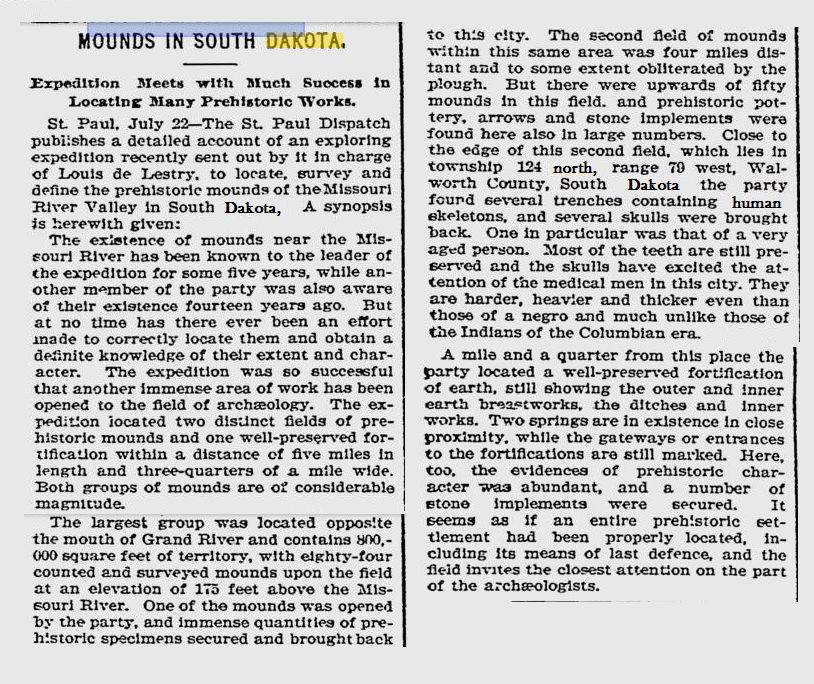 Expedition Meets with Much Success in Locating Many Prehistoric Works

St, Paul, July 23.-The St, Paul Dispatch publishes a detailed account of an exploring expedition recently sent out by it in charge of Louis de Lestry, to locate, survey and define the prehistoric mounds of the Missouri River Valley in South Dakota. A young synopsis is herewith given:

The existence of mounds near the Missouri River has been known to the leader of the expedition for some five years, while another member of the party was also aware of their existence some fourteen years ago. But at no time has there ever been an effort made to currently locate and obtain a definite knowledge of their extent and character. The expedition was so successful that another immense area of work has been opened to the field of archaeology. The expedition located two distinct fields of prehistoric mounds and one well crafted fortification within a distance of five miles in length and three-quarters of a mile wide. Both groups of mounds are of considerable magnitude.

The largest group was located opposite the mouth of Grand River and contains 900,000 square of territory, with eighty-four counted and surveyed mounds upon the field of an elevation of 175 feet above the Missouri River. One of the mounds was opened by the party, and immense quantities of prehistoric specimens secured and brought back to this city. The second field of mounds within this same area was four miles distant and to some extent obliterated by the plough, But there were upwards of fifty mounds in the field, and prehistoric pottery, arrows and stone implements were found here also in large numbers. Close to the edge of this second field which lies in township of 124 north, range 70 west, Walworth County, South Dakota the party found several trenches containing human skeletons, and several skulls were brought back. One in particular was that of a very aged person. Most of the teeth are still preserved and the skulls have excited the attention of the medical man in this city. They are harder, heavier, and thicker even than those of a negro and much unlike those of the Indians of the Columbian era.

A mile and a quarter from this place the party located a well-preserved fortification of earth, still allowing the outer and inner earth br—-tworks the ditches and inner works. Two springs are in existence in close proximity, while the gateways and entrances to the fortifications are still marked. Here too, the evidences, the evidence of prehistoric character was abundant, and a number of stone implements were secured. It seems as if an entire prehistoric settlement had been properly located, including its means of last defence, and the field invites the closest attention on the part of the archaeologists.