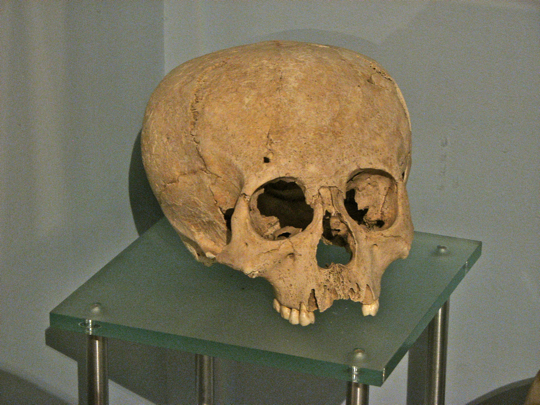 Skull found at Cacaxtla. There was no sign indicating whether this was from a sacrifice or a simple burial. There appears to have been plenty of both at Cacaxtla. The city grew up in the wake of the fall of Teotihucan. That great empire had stabilized Mesoamerica for 500 years, and its sudden collapse around 600 AD left a great vacuum of power and authority. Into that vacuum rushed a host of small cities, vying for control of the resources of their areas. Cacaxtla had the good fortune to occupy a key strategic position on the trade crossroads between the Gulf Coast and the inland civilizations, as well as the route leading from the Zapotec civilization around Oaxaca up to the northern high plains. Such a position naturally created conflict with its envious neighbors. Warfare during this period was fierce.