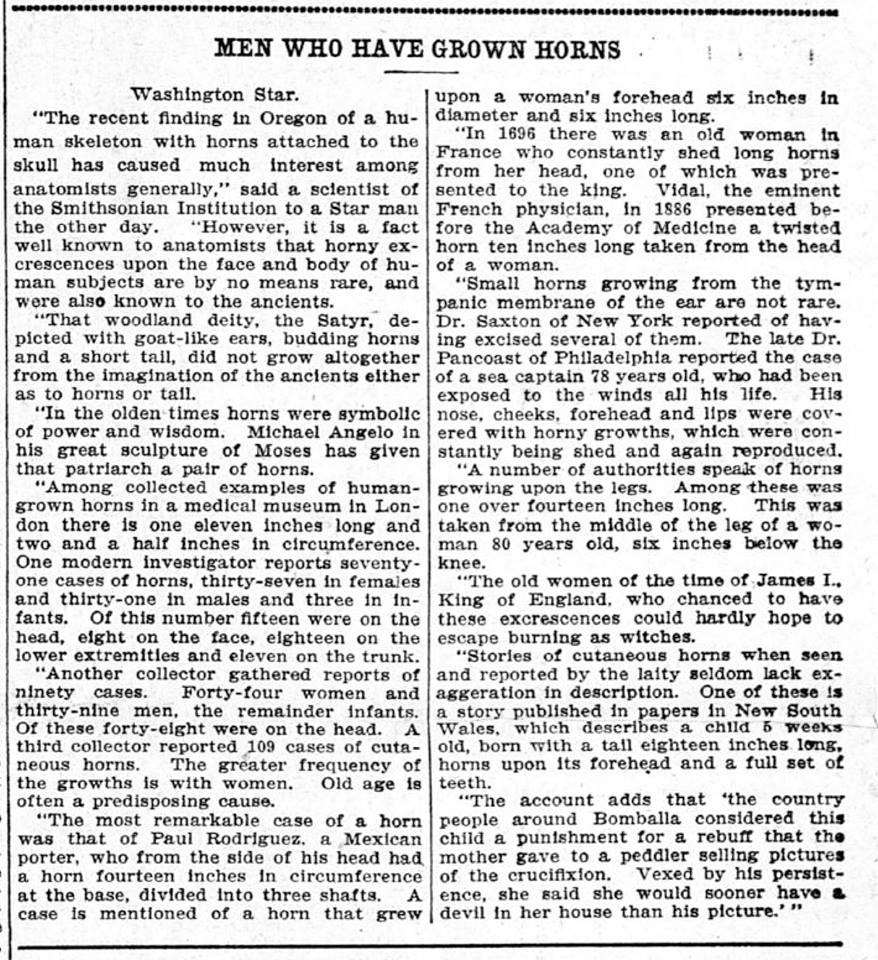 MEN WHO HAVE GROWN HORNS
upon a woman’s forehead six inches in
diameter and six inches long
“In 1696 there was an old woman In
France who constantly shed long horns
from her head, one of which was pre
sented to the king Vidal, the eminent
French physician, In 1886 presented be
fore the Academy of Medicine a twisted
horn ten inches long taken from the head
of a woman
“Small horns growing from the tym
panic membrane of the ear are not rare.
Dr Saxton of New York reported of hav
ing excised several of them The late Dr.
Pancoast of Philadelphia reported the case
of a sea captain 78 years old, who had been
exposed to the winds all his life His
nose, cheeks, forehead and lips were cov
ered with horny growths, which were con
stantly being shed and again reproduced.
“A number of authorities speak of horns
growing upon the legs Among -these was
one over fourteen inches long This was
taken from the middle of the leg of a wo
man 80 years old, six inches below the
knee
“Ihe old women of the time of James L,
King of England who chanced to have
these excrescences could hardly hope to
escape burning as witches.
“Stories of cutaneous horns when seen
and reported by the laity seldom lack ex
aggeration in description One of these Is
a story published in papers in New South
Wales which describes a chlia 6 weexs
old, born with a tail eighteen inches long,
horns upon its forehead and a full set of
teeth
“The account adds that the country
people around Bomballa considered this
child a punishment for a rebuff that the
mother gave to a peddler selling pictures
of the crucifixion Vexed by his persist
ence, she said she would sooner have a
devil In her house than his picture.*” Skeleton with horns.

MEN WHO HAVE GROWN HORNS