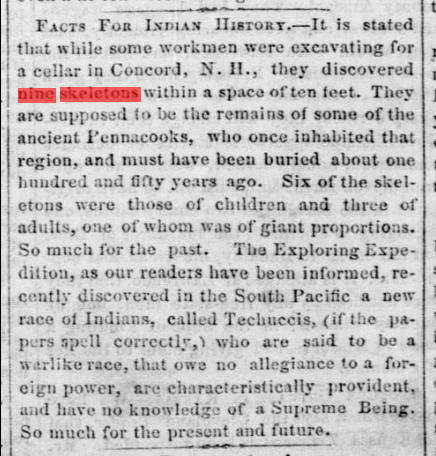 It is stated that while some workmen were excavating for a cellar in Concord N.H. , they discovered nine skeletons within a space of ten feet. They are supposed to be the remains of some of the ancient Pennacooks, who once inhabited the region, and must have been buried about one hundred and fifty years ago. Six of the skeletons were those of children and three of adults, one of whom was of giant proportions. Giant Proportions

So much for the past. The exploring expedition as our readers have been informed, recently discovered in the South Pacific a new race of Indians, called Techuccis, (if the papers spell correctly,) who are said to be a warlike race, that owe no allegiance to a foreign power, are characteristically provident, and have no knowledge of a Supreme Being. So much for the present and future.