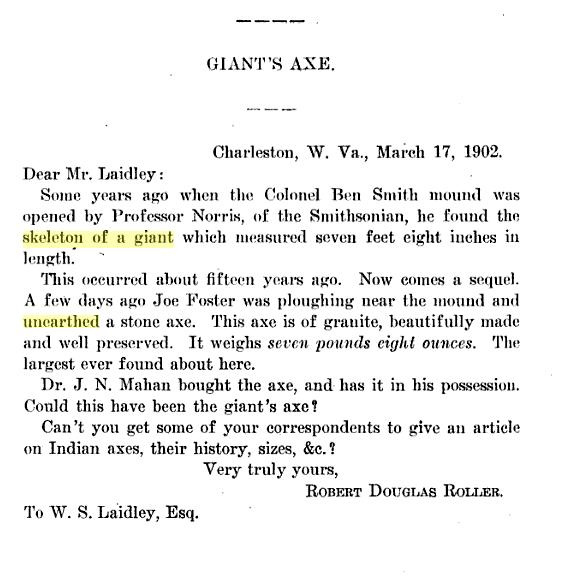 GIANT’S AXE.
Charleston, W. Va., March 17, 1902
Dear Mr. Laidley: large axe
Some years ago when the Colonel Ben Smith mound was opened by Professor Norris, of the Smithsonian, he found the skeleton of a giant which measured seven feet eight inches in length. large axe
This occured about fifteen years ago. Now comes a sequel. A few years ago Joe Foster was ploughing near the mound and unearthed a stone axe. This axe is of granite, beautifully made and well preserved. It weighs seven pounds eight ounces. The largest ever found about here.
Dr. J. N. Mahan bought the axe, and has it in his possession. Could this have been the giant’s axe! large axe
Can’t you get some of your correspondents to give an article on Indian axes, their history, sizes, &c.!
Robert Douglas Roller

In the seventh round of the 1981 NBA Draft, the Golden State Warriors used the 171st pick to select Yasutaka Okayama, a Japanese basketball player who was measured at 7 feet 8 inches (2.34 m) and 330 pounds (150 kg).[1][2] Okayama, who attended and played junior varsity basketball at the University of Portland for one and a half years in 1976 as an exchange student, declined to try out for the Warriors and never played in the NBA.

The two tallest people that have played in the NBA are only 7 foot 7 inches.

So the tallest two individuals to ever play in the NBA is shorter than this skeleton.

Also skeletons have been known to lose up to 3 inches in height so it is possible that the skeletons were more than 4 inches taller than the tallest people to ever play in the NBA.