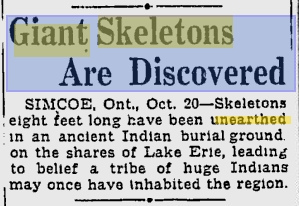 SIMCOE, Ont., Oct. 20-Skeletons eight feet long have been unearthed in an ancient Indian burial ground on the shores of Lake Erie, leading to belief a tribe of huge Indians may once have inhabited the region.  Simcoe  Simcoe

Twenty 8 foot Indians! Out of 7 Biliion people on the planet there is only three 8 footers from different locations around the globe. In the past eight feet was the norm. It is extremely rare and getting more rare. We may see the extinction of 8 foot humans altogether in the next 50 to 100 years. Humans are getting smaller as all you need is this one instance, this one location to prove that. Fact: There were more 20 footers at any time in history that there is today.

Before Robert Wadlow there numerous people taller than Wadlow, and there hasn’t been anyone that tall since. Even in the NBA the heights are:

Only one is active as of the 2013–14 season; Hasheem Thabeet of the Detroit Pistons.