WERE THEY FOOTPRINTS OF GIANTS?
The Most Eminent Scientists and College Professors of America Disctiss the Prehistoric
Tracks Jiist Discovered in British CoIiirRbia.

To W. R. Hearst, New York Journal:
It is not at all surprising that the theory is held concerning giants who existed years ago.
According to the views of all the osteologists who have handed down their ideas to the literary
world, we are certain that animals are readily distinguished, as far as nature and size are con
cerned, by their bones. Thus a single bone will often tell the entire story of the animat itself.
Scientific investigation has gone to such lengths that when a bone is found it is only neces
sary to carefully Examine it, and the beast which once owned it as part of its carcass comes up
before the eyes of the experimenter as naturally as life itself.
So, too, when a human bone is found, it is only necessary to examine it thoroughly, and the
stature of the owner can be determined. I am told that there have been discovered bones of the
ancients, the size and general character of which could not possibly be indicative of anything
but gigantic stature.
Now, if we find that the scientists have a tibia or a femur bone twice the size of those of the
present day under consideration, it is obvious that the man of whose body it once formed a
part was twice the size of the average individual to-day.
Therefore, as such cases have come under the consideration of the scientific world, it is not sur
prising that in the prehistoric ages there might have lived men thirty, forty or fifty feet in
height and built accordingly.
Yes, I believe there were giants, and plenty of them. It is hard to think of us as a race of
pigmies, but in view of scientific research in the past ten years we must consider ourselves so.
C. J. VAN OSTEN,
Osteological Department Johns Hopkins University, Baltimore, Md.
The Journal last Sunday made thfe first announcement of the discovery of
a number of prehistoric footprints on the island of Victoria, B. C., near the
town of Quatsino, on the west coast.
These were believed by local authorities to be the fossilized footprints
of an ancient race of giants who walked this earth during the era of the
mammoth, the mastadon, and the huge beasts that have long been extinct.
To ascertain whether we have at last come upon reliable evidence that
a race of giants once inhabited the earth, the Journal has obtained the opin
ions of some of the most eminent palaeontologists, anthropologists, oesteolo
gists and archaeologists in America.
The footprints discovered on the island of Victoria were twenty-nine
inches long and four inches in depth at the deepest point. The distance be
tween them indicated that the average length of the stride of the owner of
the huge feet that made the impressions, was three yards.
John L. Leason, a storekeeper of Quatsino, was the discoverer of this
remarkable fossilized relic. He reported his find to Capt. Foot, of the
steamer Mischief, who in turn informed the members of the Provincial
Historical Society, and they at once instituted an investigation, the result
of which led to the publication of the facts in the Journal.
Leason is now engaged in chiselling out the first imprint of the giant
foot that he found. When his task is complete, what is probably the first
fossilized footprint of prehistoric man ever discovered will be sent East to
be cared for as scientists may designate.
PROF. ALFRED EMERSON.
PROF. ALEX. W’FARLANE.
PROF. FREDERICK STARR.
PROF. HENRY PECK.
PROF. OLIVER MARSEY.
To W. R. Hearst, New York Journal:
I have only given to prehiis-tc^c geology a moderate amount of attention, stch as might be
given by any specialist *n classified archaeology. From all that I know conceriing the size of
skeletons discovered on classic soil, as, for example, those discovered in the prehistoric Etruscan
tombs, there is no evidence that in approximately historic times the normal sizo of living men
much exceeded eight feet.
In the ancient Greek and Italic traditions there is frequent mention of gian s. They gen
erally figure as the champions or remnants of the prehistoric inhabitants of tie respective
countries before they were occupied by the Greek or Italic races. So, for example, we hear a
great deal of giants in some of the Greek islands, and in the vicinity of Cyzicus, Asia Minor,
on the Sea of Marmora, which might fairly be called the Cornwall of antiquity.
Personally, I should not be inclined to believe in the existence at any time of human beings
greater in height t han ten feet at the utmost. Leaving the determination of the precise value of
the evidence of these footprints here reported to the paleontologists, the real experts in such
matters, and pending their agreement as to any interpretation, I should personaly conceive
the footprints to be those of other creatures, either reptiles or quadrupeds. The tiack of the
bear resembles that of man to some extent, with the exception of the arched character of the
human foot.
There are animals existing to-day whose ancestors were of large size. The cave bear, for
examples, skeletons of which have been found, and which probably antedate the gkcial peri’
od, was an animal of enormous size as compared with any of the present varieties of beir.
ALFRED EMERSOir,
Professor of Archaeology in Cornell University, Ithaca, N. Y.

PROFESSOR LAZERLY SAYS THERE MAY
HAVE SEEN GIANTS.
Professor William Lazerly, of Columbia, Ohio, says: “The fact o?ce
established that man lived in the age of the mammoth, and conclusion
other than that he was a giant, is illogical. He would necessarily have to
have been of gigantic frame, and physical powers hard for us in this day
to realize in order to prolong the struggle for existence.
“I am deeply Interested in this Victoria discovery, and will anxiously
await further details. Science has not disproved the existence of man in
preglacial age. In fact, it has proved it to the satisfaction of most
investigators, the most perfect mastodon skeleton ever described was un
earthed in the Osage Valley of Missouri, over fifty years ago.
“The beast,, so we must judge from the surroundings, had become
mired. He was surrounded by his human iiunters. They assailed him with
their rude flint weapons. Then they endeavored to kill, or perhaps cook
him by building a fire around his mighty form. The indestructab’.e charcoal
from tha| fire was found with the fossil remains. This priceless find was
offered first to the State of Missouri, and tben to our own Government,
for a nominal sum. The scientific spirit was not strong in those days, and
the fossils were finally purchased for the British Museum.
“A few years later the woolly hide of a mammoth was found in tb?
The Garsoti (Nev.) Footprint.
eternal ice near the Lena Britain Siberia. This hide and the Missouri
skeleton have put beyond peradventure the exact appearance of the *reat
kind of quadrupeds.” WILLIAM R. LAZERLY. 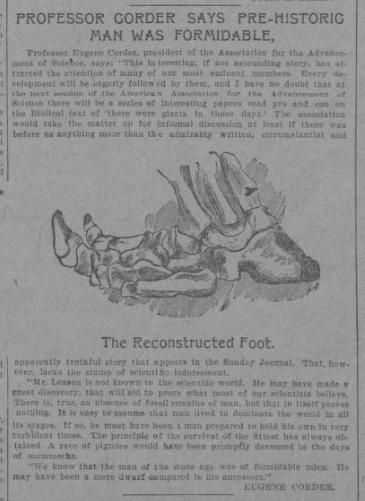 PROFESSOR CORDER SAYS FRE-HISTORIC
MAN WAS FORMIDABLE,
Professor Eugene Corder, president of the Association for the Advance
ment of Science, says: “This interesting, if not astounding story, has at
tracted the attention of many of our most eminent members. Every de
velopment will be eagerly followed by them, and I have no doubt that at
the next session of the American Association for the Advancement of
Science there will be a series of interesting papers read pro and con on
the Biblical text of ‘there were giants in those days.’ The association
would take the matter up for informal discussion at least if there was
before us anything more than the admirably written, circumstantial and
The Reconstructed Foot.
apparently truthful story that appears in the Sunday Journal. That, how
ever, lacks the stamp of scientific indorsement.
“Mr. Leason is not known to the scientific world. He may have made a
great discovery, that will aid to prove what most of our scientists believe.
There is, true, an absence of fossil remains of man, but that in itself proves
nothing. It is easy to assume that man lived to dominate the world in all
its stages. If so, he must have been a man prepared to hold his own in vex-y
turbulent times. The principle of the survival of the fittest has always ob
tained. A race of pigmies would have been promptly devoured in the days
of mammoths.
“We know that the man of ttie stone age was of formidable mien, ne
may have been a mere dwarf compared to his ancestors.”
EUGENE CORDER

PROFESSOR WFARLANE LOOKS FOR GREAT
RESULTS.
Professor Alexander McFarlane, of Lehigh University, says: “Let us
hope that Mr. Leason has successfully quarried the rock fountain holding
these footprints. The Imprints will be subjected to the most rigid -scru
tiny, and scientific men will pass an impartial Judgment ‘ip/jn their value
as throwing light upon a question that we woul<1 all want answered, wer?
these men, let alone giants, in those days? Ojj the truthful answer to thi?
question hangs everlasting things. ALEXANDER M’FARLANE

PROFESSOR TftRSNEY THINKS THE DISCOV
ERY VERY IMPORTANT.
Professor William Hall Tarsney, of Columbia, Mo., says: “The find
of this man Leason, may be the richest contribution to scientific res .ar ti
of the century. The fate of Darwinism has always hung in the balance.
Some of us believe that man was always; that he is as old as the world;
that he was built for his time and his condition. The Smifbsonlan Insti
tution people should look into this matter. Don’t let every valuable scien
tific relic go to the British Museum.” WILLIAM H. TARSNEY

PROF. FECK THINKS IT ASTOUNDING.
Professor Henry Peck, ethnological and anthropological collector, saysj
“It is the most astounding discovery of which I ever heard. It should lie
investigated by scientists. It is the second time I have heard of traces ol
the existence of gigantic men having been found on this continent, but
the glacial age In which they lived has never been accurately deter
mined.
“Otherwise, I have no doubt, the investigation could be prosecuted with
some degree of success. It is a most gratifying discovery, if true, because
it has been the almost unanimous opinion of scientists that the ancient
dwellers on this continent were actually small?not pigmies, but men be
low the normal height. On the merits of Professor Binlon’s claims I do
not desire to speak.” HENRY PECK.