Horns protruded from his skull. 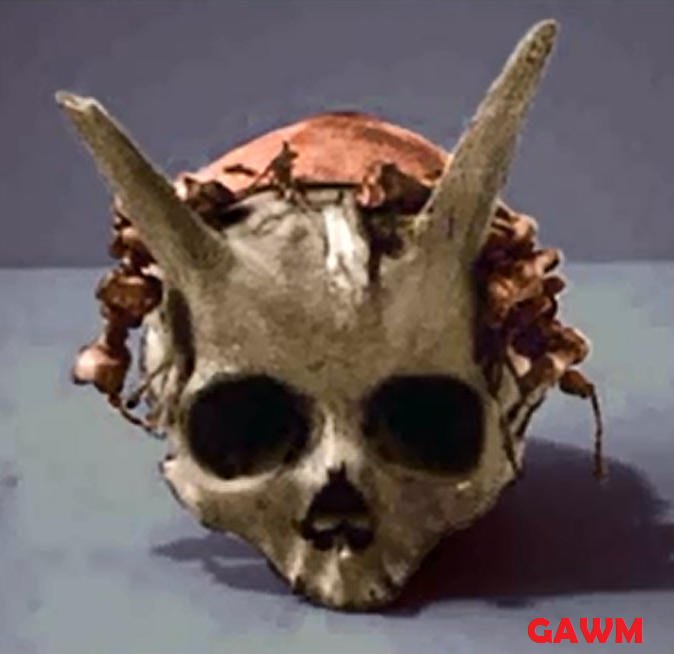 He was seven feet in height.

His name (given him by his party) is “pithecanththropes erectus”

Perhaps he was an inian perhaps not.

At the age of thirty-five he was a tottering old gentleman: at forty or earlier he usually died.

Conjure up your imagination a race of people 700 years old. Draw a mental picture of one of them. Make him seven feet tall and of perfect physique. Let him be strong but ignorant. (assumption).. Make him one of a race which at 35 years was growing old and which at 40 was near death. Finally give him horns about an inch long, protruding from his skull about two inches above the ears. Such a man there was once and no further from Elmira than what is now the Murray farm in Sayre.

If you are just a mortal and human, picture those horns and say, “Gee Whiz.” If you have the professional instinct say that it is a perfect case of “pithecanththropes erectus” and jot it down mentally that it is the first discovery of its first kind on record and one of the Big Indian lore finds of recent years. The credit of the discovery goes to the expedition headed by professor W. K. Moreland of Phillips Andover Academy, and professor A. B. Skinner of the American Indian Museum of New York, to which the skull of the horned indian was shipped several days ago.

The expedition found at Sayre contributions of testing worth to the history of Indians. The horned skull of this gigantic ancestor of the Tiogans is probably the most spectacular of its discoveries but no less interesting is the assertion based on actual evidence that about 700 years that southern Tiogo an Chemung counties and northern Pennsylvannia were inhabited by a race of men, perhaps Indians and perhaps not. who were gigantic in stature and who lived only a short term in life. To prove the assertion of the scientists are the bones of 68 men of old taken from a single burying ground on the Murray farm. which is situated at Tioga point at the upper end of Queen Esther’s flat. The average height of these men whom the skeletons are assembled is seven feet while many are much taller. Further evidence of their gigantic size is found in the remarkable large celts or axes. hewed from stone found in the gravesvwiththem and capable of being wielded only by a man of immense physical strength.

Chemung’s Predecessors Were Seven Feet Tall and Had Horns

One of the Most Remarkable Scientific Discoveries in History Made Here-Sixty-eight skeletons of Men Living 700 years Ago Unearthed between Sayre and Waverly- Men were old at Forty.

HOW AGE IS TOLD.

When a man is 20 years ol the seams of the skull begin to knit. At 80 years they are completely joined. Thus scientists by examining a skull will tell you the age of the person at death. So professor Skinner’s expedition has been able to estimate with accuracy the age of these primevil  me’s death. At 40 one was a patriarch. Imagine the reverence which with one venerable gentleman whose skull showed a life of nearly 70 years must have been regarded The average age of death, however, is estimated at 40 years.This premature death, say Professor Skinner and other members of his party \, was almost wholly due to lack of medical knowledge and the practice of preventive medicine. Among tribes where the ravages of contagious disease was unchecked the lease of life was short.

It was a wet cold storage when R. H. Lord, who has been employed by Professor Skinner in Indian research work for six years uncovered the earth from one of the Murray Farm graves, and carefully escaping away the soil beside an Indian skull, gave a yell which brought the other 15 other members of the party running to the grave.

“‘E’s got ‘orne,” shouted Lord. who talks with an English accent. “‘E’s in league with the devil,”

HE SURELY HAD HORNS

And sure enough, he had horns, horns of solid bone which grew straight out from the skull about two inches above the perfectly formed skull and which gave every evidence of having been there since birth. They were in no way attached to the skull. They were an integral part of it. Then the scientists got out their notebooks and their cameras and searched their vocabulary for words meaningless to laymen, finally hitting upon “pithrocanthropus erectus” as having just the right swing and describing the horns as a nicety.

Members of the expedition say that it is the first discovery of its kind on record of a valuable contribution to the history of the early races. The skull and what few bones were found in the grave with it have been shipped to the American Indian Museum. The party expects to find more horned heads  futher down the Susquehanna.

The party of scientists, which includes besides  Professors Morehead and Skinner, Dr. George Donahue Pennsylvannia State Historian, E. O. Sodgen, a survivor, and ten other men who have had practical experience in digging up American burying grounds, left Cooperstown May 16, traveling down the Susquehanna in canoe. This river was chosen because it had never been worked scientifically before and promised rare treasures. It was agreed that whenever discoveries were made one half of the relics should be given to a local institution or society, an agreement which has resulted in valuable acquisitions by the Sayre Museum.

Sad to relate, the party met up with an extremely cold reception in Broome county. They cannot altogether understand it. they say, but attribute it  partly to the jealousy of antipathy of Binghampton Indian collectors. At east Windsor, however, they found an old shellbed where Indians once built their wigwams and cook their fresh water clams, which were to be found in abundance. Only the history of the Iriquois and Algonquins was studied. All the way down the Susquehanna and its Northern Pennsylvannia. The expedition found traces of Indian settlements with large camps at Great Bend and the round top near Union.

And then came Waverly. The Murray farm was no less than a gold mine. In a few days the bones of 68 Indians had been taken from their graves. First postholes were dug, then the land was surveyed and finally the work of digging was begun.

It must be remembered that the early Indian had no metal tool, his combined spade, pick and hoe usually being the shoulder of some large animal. He dug a grave five feet deep and buried his dead, scattering a little earth over the bones. Another death and another Indian was tossed into the grave atop the first.

It was convenient and a great labor saving device. In order not to waste room the dead indian was hung in the tree until the flesh disappeared. Then the bones were tied in a bundle and tossed into the grave. Another method and shorter was to flex the body with the knees up to the chin. Only a few such burials were discovered in Sayre.

The members of the Skinner Expediton believe that the Murray burying ground is one of the largest that will be found. More graves might have been exhumed had the burying ground not run directly under a macadam road where excavations could not be made.

The party expects to conclude its neighbors near Baltimore September 15.

Conjure up your imagination a race of people 700 years old. Draw a mental picture of one of them. Make him seven feet tall and of perfect physique. Let him be strong but ignorant. (assumption).. Make him one of a race which at 35 years was growing old and which at 40 was near death.  Finally give him horns about an inch long, protruding from his skull about two inches above the ears. Such a man there was once and no further from Elmira than what is now the Murray farm near Athens. says the Elmira Star-Gazette.

If you are just a mortal and human, picture those horns and say, “Gee Whiz.” If you have the professional instinct say that it is a perfect case of “pithecanththropes erectus” and jot it down mentally that it is the first discovery of its first kind on record and one of the Big Indian lore finds of recent years.

Several human skulls with horns protruding from them were discovered in a burial  mound at Sayre, Bradford County, Pennsylvania, in the 1880’s.  The bones were  sent to the American Investigating Museum in Philadelphia, where like so many  finds that question anthropology, they were stolen and never seen  again.

There is something curious which would appear to be anti-intelligence, two contradictory locations one may be to cause a searcher to be misdirected. Here is one example of the word “Sayre” which is scribbled out and “Athens” hand written above it.

The next one is below I can’t quite make out what it says but it looks like “Angle”?

The next is the crossing out of the word Waverly,

and another word written in.

It appears Athens is written in place of Waverly, while something is written over Murray.

The solving of part of this mystery comes from the word which is replaced in a word for word identical article, see the one phrase in red the original location vs the replaced one and the Newspaper that this article originates.