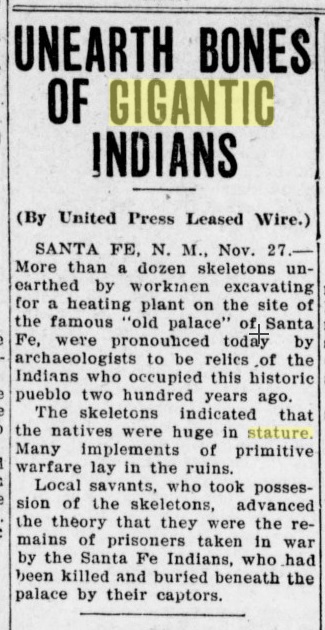 SANTA FE, N. M., Nov. 27.— More than a dozen skeletons unChrthed by workmen excavating for a heating plant on the site of the famous “old palace” of Santa iFe, were pronounced today by

archaeologists to be relics .of the Indians who occupied this historic pueblo two hundred years ago. The skeletons indicated that the natives were huge in stature. Many implements of primitive warfare lay in the ruins.

Local savants, who took possession of the skeletons, advanced ihe theory that they were the remains of prisoners taken in war by the Santa Fe Indians, who had been killed and buried beneath thg palace by their captors.