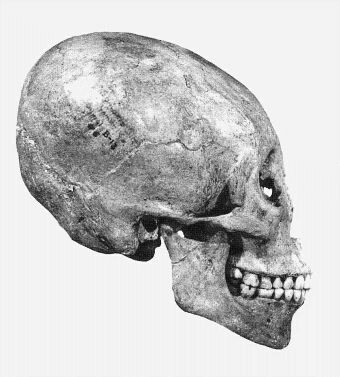 “It is definitely an unusual specimin with a significantly larger brain capacity, probably around the 2000 cc range. Very similar to a Neanderthal skull and definitely human. The skull has all the right bones and sutures. It is very similar to Akhenaten’s skull and doesn’t show any evidence of deformation. The one difference that I just noticed with Akhenaten’s skull is that the occipital bone, which is supposed to be on the back of the head is on the bottom. Very peculiar.” Seralia

“as Cyclone Covey has shown linguistic simitlarities in the Atakapan language of the Texas Gulf coast and Ancient Egyptian. The Atakapans were best represented by the abnormaly large and powerful Karankawas who rescued Cabeza De Vaca’s shipwrecked crew on the Texas coast in the 1520’s. These are people you might want to look at in relation to Giants in America although they are not the red haired giants of Nevada who were exterminatied by the Paiutes around 800 AD. These people, the Karankawas were well over six feet tall and their long bows could not be drawn by the average European. An early Texas account tells of a Karankawa shooting an arrow completely through a black bear at 600 yards and that story was by no means unique. The Karankawas were finally exterminated in the 1840’s because of their practice of stealing children and eating them. This was not a practice limited to the Karankawas and the Tonkawas who were infamous for their non ritual cannibalism aided the destruction of the Comanches who shunned any form of cannibalism and were waging a genocidal war against the Tonkawa.” Tex Arcana