ANTIQUARIAN DISCOVERIES.
Belies of That Mysterious Race Known as the American Mound Builders.
The skeleton of which an illustration is given was ‘discovered in a mound upon farm near Frankfort, O. Popular
Science News says: This mound was
oval in shape, with diameters of 110
fret and 60 feet, Its original height was apparently about 10 feet. Several skeletons were found in this mound, but with one exception they were almost entirely decomposed and crumbled away into dust on exposure
to the air. The one represented in the engraving was that of a man over 6 feet In height, and the size of the bones showed him to have possessed
superior strength.
Near the head were found five teeth of a bear and two of a panther. These were all perforated an£ doubtless formed a necklace or amulet. On the right side of the skeleton were found a plate and other articles of copper and a large number of shells.
The other skeletons found in this mound Showed a remarkable diversity in the method of burial. The greater part of them were interred lying at length. Some, however,
were placed In a contracted position, the knees being bent up toward the chin. Two among them had evidently been burned either before or after death. These different forms of sepulture may indicate burials
at different ages or by different races, or, more likely, a difference in the rank of those buried.
Among other discoveries was one of the so called “altars” of burnt clay, which are frequently found in the mounds. It was rectangular in form,- with symmetrically rounded corners and measured SO by 24 inches. In the center was an oval depression measuring 18 by 12 inches and 4 inches in depth. This depression, contained ashes and fragments of human bones. Various objects have been found upon these altars, but all bear marks of the action of fire and were undoubtedly connected with religious or funeral rites.
All discoveries hitherto made throw but little light upon those mysterious people, whom for want of a better name we call the mound builders. While they are appar ently distinct from the Indians who occupied the continent at the time of its discovery, they may have flourished in comparatively modern times, perhaps not many years before the coming of Columbus. Their
civilization resembles in many respects that of the men of the bronze age in Europe, but with the notable exception that native copper was the only metal used by them.
Ovens and Murray Advertiser (Beechworth, Vic. : 1855 – 1918)Sat 17 Sep 1898 Page 5 Science Progress.
https://trove.nla.gov.au/newspaper/article/199738926 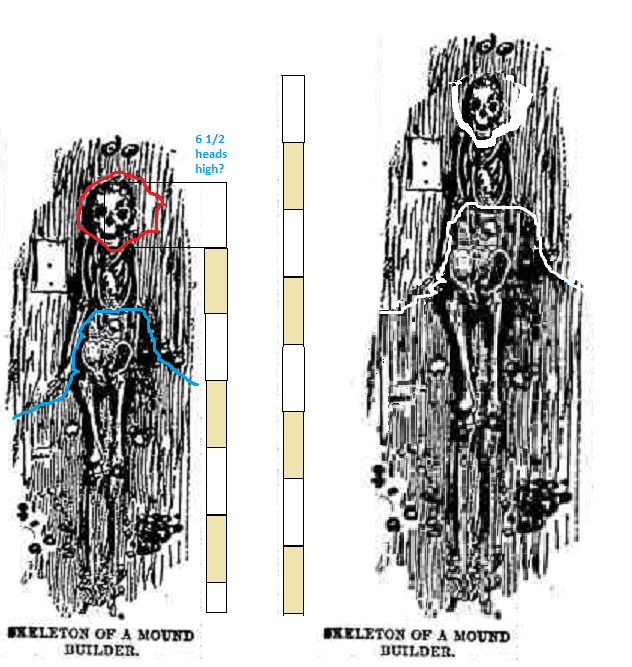 Cut and paste was the photoshop-fake of the day. This image shows obvious signs of cut and paste. Making and enlargement was not easy but a stick of glue and a handy pair of scissors helped to do the trick. This resulted in lines not matching up and obvious anatomical problems with an image or illustration.

The Head: The head is way large, out of proportion by more than a head and a half. It was simply a cut out, printed larger, and glued on top resulting in all the lines mot matching up, and a halo around the head. The chin overlapped the neck, resulting in the upper jaw placed lower than the shoulder. (The space for the neck has been eliminated)

The cut line at the waist:The hatching marks change patterns and the weight and thickness of the line changes pointing to the lower half of the image being shrunk down to size.

Maturity: The altered skeleton on the left has the appearance of a 6 year old a large head and smaller lower body. We know however that this is a robust adult of superior strength. (big difference)

Superior Bones: So normally I do not post newspaper articles where the height is barely above average (4″) at 6 foot tall. Above average when considering that about 80% of the fossils found of humans and animals are adolescent males and or women, if fact considering the low 6′ (being not outside the norm today) when it comes to fossil finds it should be considered outside norm, especially in the absence of little-monkey-men. This article illudes directly to the bones being large, robust, and outside the norm when the article uses the word “superior”.

Fraudulent Layout: There was obviously a bad measurement of the skeleton when you look at how the bones were laid out. The skull was laid out on the chest practically eliminating the length of the neck. the ribs were piled up haphazard and unprofessionally. The feet are missing, were the length of the hell and ankle not considered in the length. It would appear that there were some deceptive steps in altering the image to make the skeleton appear shorter, so it is likely that the same was done when making a statement of the height of this individual.