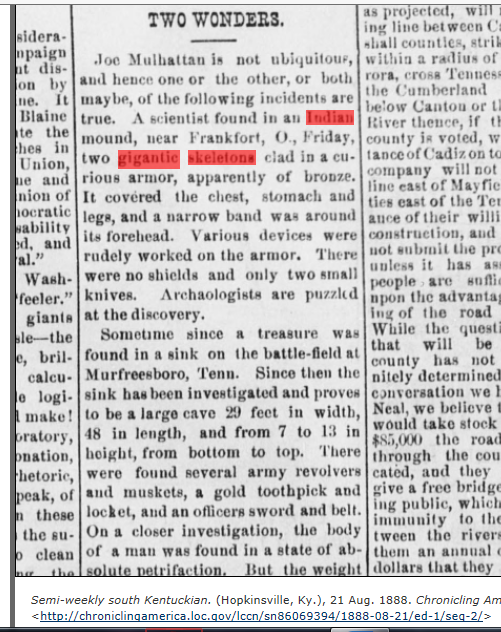 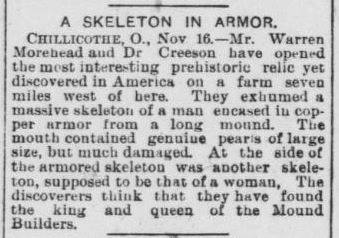 5) The Ohio Democrat, (New Philadelphia, Ohio) November 19, 1891. A great find of prehistoric remains is made at Chillicothe, Ohio. from an Indian Mound. A skeleton in Armor. “they exhumed the massive skeleton of a man, which was encased in a veritable copper armor.” “three monster skeletons, . . . over seven feet in height.”

7) A Standard History of Ross County, Ohio, Volume 1, 1917. The Skull was of Unusually Large Size.

11) The Washington Post, December 4, 1898. Dug up Skeleton Eight Feet Long. “But it was the size of the skeleton that amazed those who saw it. . . an inch short of eight feet. . . in life was fully eight feet in height. . . the man was a giant in strength as well. . . a third larger than an average human skull, . . . abnormal in size and thickness.

12) Ohio Archaeological and Historical Quarterly, 1899. “The bones were the largest i ever removed from a mound. All joints were exceedingly massive and the muscular attachments were wonderfully developed.”

13) Prehistoric America, 1911. “the skeleton was discovered of a very tall woman. Encyclopaedia of Ancient Giants. p395.