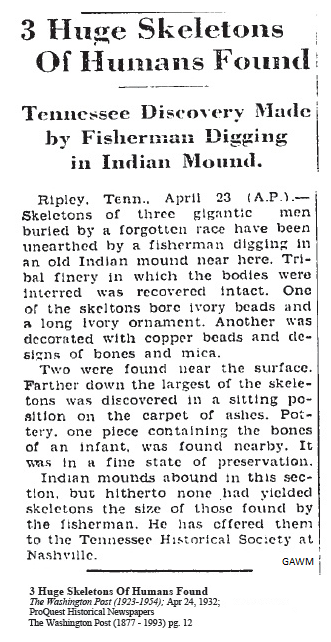 Tennessee Discovery Made by Fisherman Digging in Indian Mound.

Ripley, Tenn., April 23 (A.P.).-Skeletons of three gigantic men buried by a forgotten race have been unearthed by a fisherman digging in an old burial mound near here. Tribal finery in which the bodies were interred was recovered intact. One of the skeletons bore ivory beads and a long ivory ornament. Another was decorated with copper beads and designs of bones and mica. Two were found near the surface. Farther down the largest of the skeletons was discovered in a sitting position on the carpet of ashes. Pottery, one piece containing the bones of an infant, was found nearby. It was in a fine state of preservation.

Indian mounds abound in this section, but hitherto none had yielded skeletons the size of those found by the fisherman. He has offered them to the Tennessee Historical Society at Nashville. ripley

I am sure the Tennessee Historical Society today is unaware of their giant collection. I am sure the current archivists would at least like to be aware of these items. It is likely that there is still a catalogue, in which they may still have these items or they may have donated them to another institution. They would still have records of this and it is possible to track these items down. We are the giant researchers, not the giant hunters it is up to you to follow up the leads in your area and find these missing specimens. If you live in the Nashville or Ripley TN area, follow up with the Tennessee Historical society and let us know what you find.