RELICS OF A PAST RACE 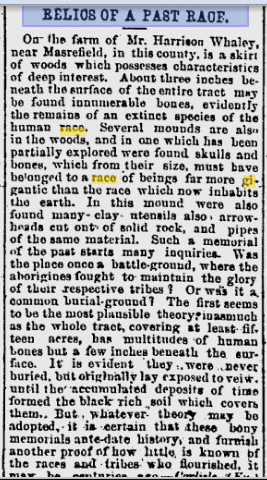 On the farm of Mr. Harrison Whaley, near Masrefield, in this county, is a skirt of woods which possesses the characteristics of deep interest. About three inches beneath the surface of the entire tract may be found innumerable bones, evidently

the remains of an extinct species of the human race. Several mounds are also in the woods,  and in one which has been partially explored were found skulls and bones, which from their size,  must have belonged to a race of beings far more gigantic that the race which now inhabits the earth. In this mound were also found many clay utensils also arrowheads cut out of solid rock, and pipes of the same material. Such a memorial of the past starts many inquiries. Was the place once a battleground, where the aborigines fought to maintain the glory of their respective tribes? Or was it a common burial ground? The first seems to be the most plausible theory insomuch as the whole tract, covering at least fifteen acres, has multitudes of human bones but a few inches beneath the surface. It is evident they were never buried, but originally lay exposed to view, until the accumulated deposits of time formed the black rich soil which covers them. But whatever theory may be adopted, it is certain that these bony memorials ante-date history, and furnish another proof of how little is known of the races and tribes who flourished, it may be centuries . . . (This article is a stub)