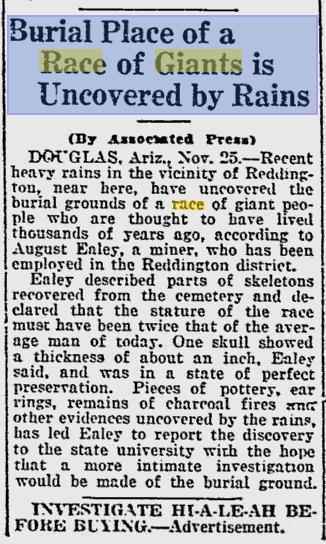 (This article is from a document reader and is unedited)

Douglas, Aria—Recent heavy rnlns In the vicinity of Reddington, near here, have uncovered the burial grounds of a race of galnt people who are thought to have lived thousands of years ago, according to August Eale.v, a miner, who lias been employed in the Reading district. Enley described parts of skeletons recovered from the cemetery and declared that the Stature of the race must have been twice that of the
average man of today. One skull show
ed a thickness of about an inch, Enley
said, and was In a state of perfect pre
servation. Pieces of pottery, earrings,
remains of charcoal fires and other evi
dence uncovered by the rains 1ms tod
Enley to report the discovery to the
state university with the hope that a
more Intimate investigation would be
guide of the burial ground.
fehle -JotlKS t&Rr