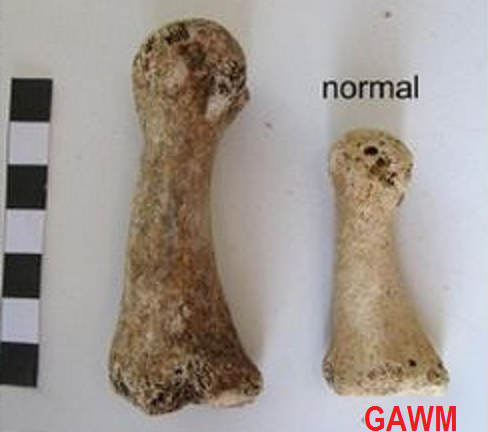 “(Phys.org)—Paleopathologist Simona Minozzi and her team working at the University of Pisa, have published a paper in the Journal of Clinical Endocrinology and Metabolism describing the skeletal remains of a Roman man from the third century that was first partially unearthed in 1991 in Italy. It is believed the man had gigantism, a metabolic condition that causes people to grow exceptionally tall. The skeleton was believed to have been from a man between the ages of 16 and 20 when he died, who would have stood 6 feet, 8 inches tall.”

The above statement is the “official” statement from academia. However I would like to point out some holes in this bias position. First we will start out with the finger: a comparison of a six foot 8 inch person does not have the size finger of the above finger. In comparison their finger would be smaller and not nearly as robust, this is true with the rest of the skeleton. 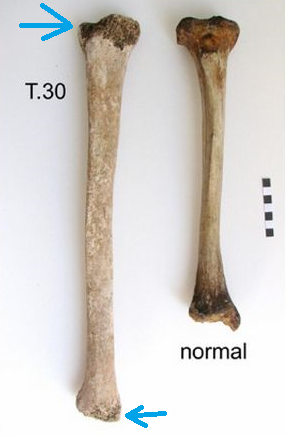 The bones are missing quite a bit of “end-material” (several inches)look at how much less material. A larger bone would have more muscle-connective material than the smaller bone. It would appear that 7/8ths of an inch at each end of the bone is missing from decay or it has been removed. Look how much higher the smooth material goes up on the bones surface, while it would seem that the two bones are indeed at the same elevation. This is a lot of height that is missing from this specimen, the vertebrae are not shown as they would be a key indicator of height, as well as the upper femur bone. 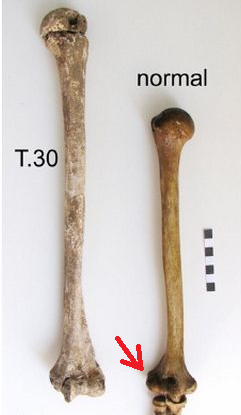 A phenomenon goes on with sizing skeletons that seem to be “too-large”. This is “cartilage-ignorance”. This is where the cartilage is ignored and when taking measurements the bones are actually touching when the measurements are taken. For instance: none of your vertebrae or limb bones actually touch they are separated a good distance by the cartilage. In fact people when they get older lose cartilage in their vertebrae resulting in a great decrease in size. Cartilage is a great deal of your height and it is all counted as nothing in these bogus calculations.

In fact: these individuals that are greater than todays weaker descendants would have a great deal MORE cartilage than we have today, so extra height MUST be calculated into these figures. Some times it is almost embarrassing to have to point out these obvious discrepancies that career-oriented academists make continually over and over.