Giant sized stone blades from salad plate-sized, elegantly crafted bifacial knives and a unique tool resembling a double-bitted axe to small blades and flint scraps.
Discovered in May 2008 by Brant Turney — head of a landscaping crew working on the Mahaffy property — the cache was unearthed with a shovel under about 18 inches of soil and was packed tightly into a hole about the size of a large shoebox.
Douglas Bamforth, anthropology professor at the University of Colorado at Boulder, left, and Patrick Mahaffy, show unearthed artifacts found about 2 feet below Mahaffy’s front yard at his house in Boulder during a landscaping project in 2008.

A landscaping company uncovered a collection of 83 stone artifacts in 2008 during an excavating job at Patrick Mahaffy’s home in Boulder, Colo. . . . This unearthed collection, dubbed the Mahaffy Cache, is one of only a few in North America and its story will be presented to the northern Nevada community next week.

“The fact that the tools were deposited as a single event and contain residues from ice-age animals essentially provides us with a snapshot in time of what hunter-gatherers were doing . . . ,” said Geoffrey Smith, University of Nevada, Reno assistant professor in anthropology and executive director of the Great Basin Paleoindian Research Unit. “It’s a once in a lifetime find.”

“We are thrilled about Professor Bamforth’s visit and the establishment of the Distinguished Lectureship in Archaeology Series,” Smith said. “Dr. Bamforth’s visit will serve as a model for future installments of the series and help to generate interest within our department, among the campus community and general public.”

Bamforth received his doctorate degree from the University of California, Santa Barbara in 1986. He has worked on projects throughout the country and has numerous published articles and books.

More than 80 stone implements were discovered together in Boulder city limits by landscapers. A biochemical analysis of a rare Clovis-era stone tool cache recently unearthed in the city limits of Boulder, Colo., indicates some of the implements were used to butcher ice-age camels and horses that roamed North America. 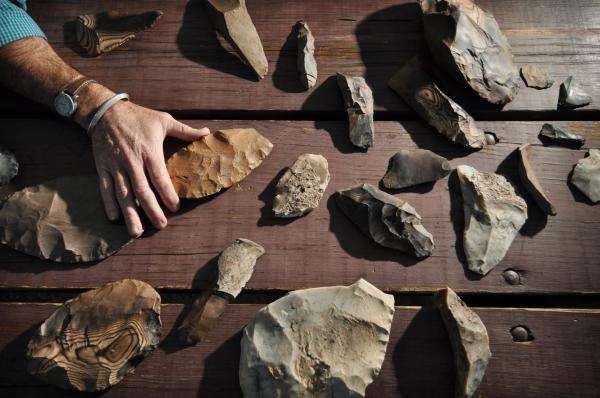 All 83 artifacts were shipped to the anthropology Professor Robert Yohe of the Laboratory of Archaeological Science at California State, Bakersfield for protein residue tests that were funded by Mahaffy. The protein residue on the artifacts was tested against various animal anti-sera, a procedure similar to standard allergy tests and which can narrow positive reactions down to specific mammalian families, but not to genera or species.

“I was somewhat surprised to find mammal protein residues on these tools, in part because we initially suspected that the Mahaffy Cache might be ritualistic rather than a utilitarian,” said Yohe. “There are so few Clovis-age tool caches that have been discovered that we really don’t know very much about them.’

While the quality and patterns on several of the artifacts resemble Clovis stonework, “It was the camel and horse protein results that were the clincher for me,” said Bamforth. “We haven’t had camels or horses around here since the late Pleistocene.” The artifacts that showed animal protein residues were each tested three times to ensure accuracy.

The artifacts were buried in a coarse, sandy sediment overlain by dark, clay-like soil and appear to have been cached on the edge of an ancient stream, said Bamforth. “It looks like someone gathered together some of their most spectacular tools and other ordinary scraps of potentially useful material and stuck them all into a small hole in the ground, fully expecting to come back at a later date and retrieve them.”

One of the tools, a stunning, oval-shaped bifacial knife that had been sharpened all the way around, is almost exactly the same shape, size and width of an obsidian knife found in a Clovis cache known as the Fenn Cache from south of Yellowstone National Park, said Bamforth. “Except for the raw material, they are almost identical,” he said. “I wouldn’t stake my reputation on it, but I could almost imagine the same person making both tools.”

“There is a magic to these artifacts,” said Mahaffy. “One of the things you don’t get from just looking at them is how incredible they feel in your hand –they are almost ergonomically perfect and you can feel how they were used. It is a wonderful connection to the people who shared this same land a long, long time ago.” Mahaffy said the artifacts will likely wind up in a museum except for a few of the smaller pieces, which will be reburied at the cache site.

But by far, the highest concentration of giant artifacts is found in North America. Here, Douglas Bamforth, Anthropology professor for the University of Colorado at Boulder, left, and Patrick Mahaffy, property owner, show a portion of more than 80 artifacts unearthed

It is obvious these tools were constructed and used by people of large sizes. No average sized human today would be able to effectively utilized such implements. Once again scripture tells the truth when it says; “there were giants in those days.”

Colorado’s Douglas Bamforth to speak on the intriguing find

Rachel Sa-Onoy is a student writer for the University Media Relations Department.