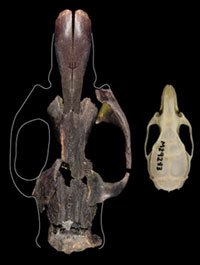 The new species was three times heavier — about six kilograms (13 pounds) — than the biggest rats known to exist today,  which are found in the tropical forests of the Philippines and New Guinea.

“Rodents make up 40 percent of mammalian diversity worldwide and are a key element of ecosystems, important for processes like soil maintenance and seed dispersal,” Ken Aplin, an archaeologist with Australia’s Commonwealth Scientific and Industrial Research Organization (CSIRO), said in a press release.

“Maintaining biodiversity among rats is just as important as protecting whales or birds,” he said.

Researchers found 13 more rat specimens in caves on Timor and other islands, 11 of which are completely new to science.

Aplin said that some of those new species may still be alive today and have simply eluded detection by scientists.

“During a recent field trip in East Timor, I found the remains of a freshly dead rat which we knew about only from cave deposits,” Aplin said.

“Although less than 15 percent of Timor’s original forest cover remains, parts of the island are still heavily forested. So who knows what might be out there?” he said.

Aplin’s and a colleague’s findings were published online in the Bulletin of the American Museum of Natural History.

Images show the nearly complete skulls and teeth rows of the giant rat compared to those of the common black rat.”