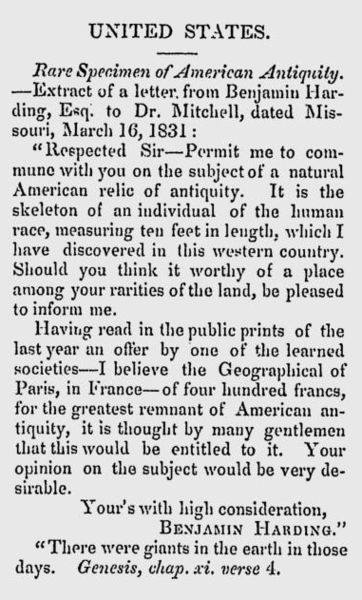 “Respected Sir-Permit me to commune with you on the subject of a natural American relic of antiquity. It is the skeleton of an individual of the human race. measuring ten feet in length, which i have discovered in this western country. Should you think it worthy of a place among your rarities of the land, be pleased to inform me.

Having read in the public prints of the last year an officer by one of the learned societies-I believe the Geographical of Paris, in France-of four hundred francs, for the greatest remnant of American Antiquity, it is thought by many gentleman that this would be entitled to it. Your opinion on the subject would be very desirable.

“There were giants in the earth in those days. Genesis, chap. xi. verse 4.

The presence of ten footers in the past destroy human evolution, it is inevitable that one will escape the grasps, the coverups, the control of government education. It will only take one, but in fact there are many from this account to Castelneu skeleton, and all the historical testimonies. 10 foot humans are a big problem facing evolution, if one slips the public will respond in a favorable way towards Greater Ancestry, over common ancestry. This year i will be releasing my third Youtbe video on 9 foot giants, after that i will be seeking 100 10 footers.