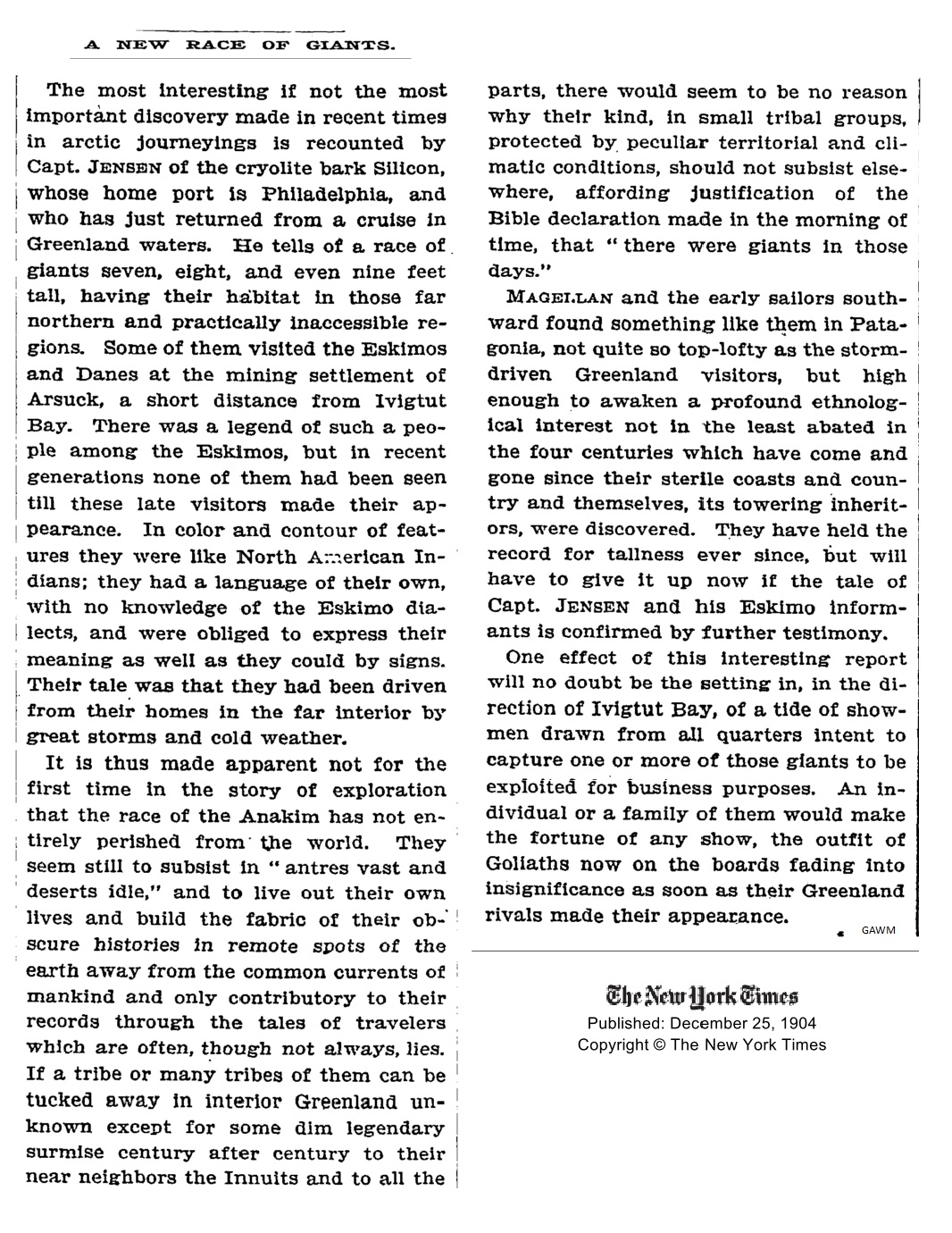 A NEW RACE OF GIANTS.

The most interesting if not the most important discovery made in recent times in arctic journeyings is recounted by Capt. Jensen of the cryolite bark Silicon, whose home port is Philadelphia, and who has just returned from a cruise in Greenland waters. He tells of a race of giants seven, eight, and even nine feet tall, having their habitat in those far northern and practically inaccessible regions. Some of them visited the Eskimos and Danes at the mining settlement of Arsuck, a short distance from Ivigtut Bay. There was a legend of such a people among the Eskimos, but in recent generations none of them had been seen until these late visitors made their appearance. In color and contour of features they were like North American Indians; they had a language of their own, with no knowledge of the Eskimo dialects, and were obliged to express their meaning as well as they could by signs. Their tale was that they had been driven from their homes in the far interior of the great storms and cold weather.

A Race of Anakim still Remain

It is this made apparent not for the first time in the story of exploration that the race of the Anakim has not entirely perished from the world. They seem still to subsist in “antres vast and deserts idle,” and to live out their lives and build the fabric of their obscure histories in remote spots of the earth away from the common currents of mankind and only contributory to their records through the tales of travelers which are often,  though not always lies.

If a tribe or many tribes of them can be tucked away in interior Greenland unknown except for some dim legendary surmise century after century to their near neighbors the Inuits and to all of their visitors to their country from foreign parts, there would seem to be no reason why their kind, in small tribal groups, protected by pure territorial and climatic conditions, should not subsist elsewhere, affording justification of the Biblical declaration made in the morning of time, that “there were giants in those days.”

Not Unlike Megellan and the Patagonians

MAGELLAN and the early sailors southward found something like them in early Patagonia, not quite so top-lofty as the storm-driven Greenland visitors, but high enough to awaken a profound ethnological interest not in the least abated in the four centuries which have come and gone since their sterile coasts and country and themselves, its towering inheritors were discovered. They have held the record for the tallest ever since, but will have to give it up now if the tale of capt. JENSEN and his Eskimo informants is confirmed by further testimony.

One effect of this interesting report will no doubt be the setting in, in the direction of Ivigtut Bay, of a tide of showman drawn from all quarters intent to capture one or more of these giants to be exploited for business purposes. An individual or family of them would make the fortune of any show, the outfits of Goliath now on the boards fading into insignificance as soon as their Greenland rivals made their appearance.