My girlfriend Devan is an investigative journalist, who found a missing devolutionary example: The Rabbits greater ancestor. The rabbits greater ancestor happened to be on my problem solving list. It was missing in my research, so to me this particular creature was of high priority.  You may not be as exited about it as I am, but if you could see the entire picture that is unfolding with devolution, you might be.

The most outstanding thing about the rabbits greater ancestor is its gigantic size (average 12kg) although this estimate may be too low. This animal also distributes a very robust skeleton which is a very amazing and predictable feature from a devolutionist’s perspective.

The skeleton is said to be short and stiff, the cartilage was not persevered so inaccuracies abound in the spinal reconstruction. This would make the skeleton larger than what is being portrayed.

It seems the skull reconstruction may be tilted downward in the back as the underside is broken off. A slight tilt (front downward) would display that the braincase is large and cohesive with this large animal. 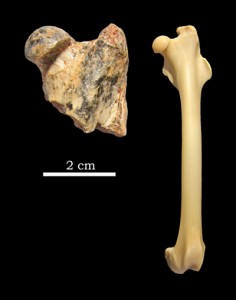 There is a decrease in this creature in metabolic energy expenditure, as in all creatures this is due to the amount of use from food consumed compared to heat loss. Most creature today expend most of their energy (80 percent or more) to this. There is a big energy expenditure difference between reptiles and mammals.

The skeleton is found in the Pliocene flood layer. 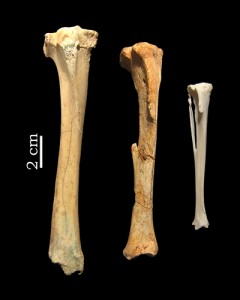 This creature is a Leoporid of extraordinarily large size, and the skull is small relative to body size.

Which makes this creature (Microcephalus). As are all greater ancestors expected to be.

(Read “I found a tooth now what”) To learn more about Microcephalus vs. Macrocephalus reconstructions.

The skeleton was found in Minorca, Spain. 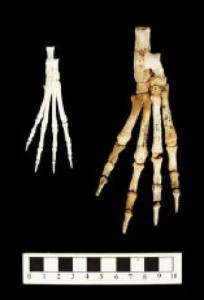 The sinus cavity is and facial reconstruction is partial, so the snout may have been longer, and may be a poor reconstruction resulting from failed preconceived ideals.

Ribs are relatively short and robust, though larger than its weaker descendants.

Longer robust forelimbs, and robust back limbs relatively short but longer than its weaker descendants.

With an estimated average body mass of approximately 12 kg, the new leporid from Minorca exceeds by about 10 times the estimated mean body mass of the ancestral continental Alilepus turolensis (-Martnez, 1989) from the Upper Miocene of Teruel (Spain). Compared to extant rabbits, Nuralagus is more than 10 times larger than wild O. cuniculus (1.0-1.2 kg) from continental Spain, and it even surpasses the body mass of the largest domestic rabbit by about 2 times (‘Flemish’; 7 kg). Compared to extant hares, Nuralagus is more than 2 times larger than individuals of the northernmost populations of the largest species of the genus Lepus (Lepus europaeus, up to 5 kg), which is the largest phenotype following Bergmans rule.

Comment: (The rabbits greater ancestor is bigger, better, stronger and faster than any weaker descendant that has spawned from it. Showing the opposite of evolution and clearly displays devolution a process of degeneration.)