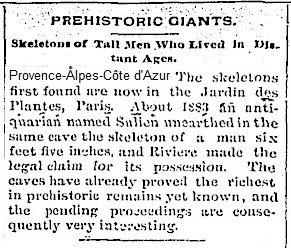 Skeletons of Tall Men Who Lived in Distant Ages.

The skeletons first found are now in the Jardin des Plantes,  Paris. About 1883 An Antiquarian named Sullen unearthed In the same cave the skeleton of a man six feet five inches , and Riviere made the legal claim for its possession . The caves have already proved the richest in prehistoric remains yet known, and the pending proceedings are consequently very interesting.