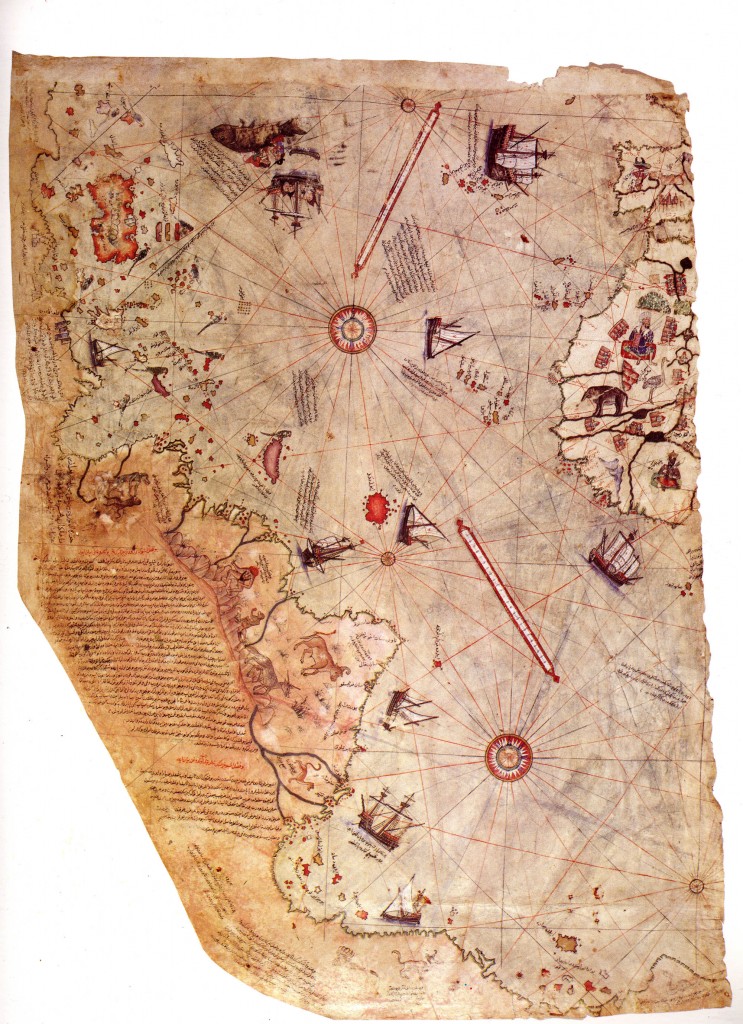 the story of creation suggests that there was only one land mass initially. Scientists today believe that all the continents were at one time one mass as well.

What can you say about a map which dates back to at least 300 that shows the full circumference of the earth to plus or minus 50 miles? How do you explain an accurate AERIAL map of all of the continents, during a period when most of the scientific world believed the earth to be flat? (Wrong Answer!)

What can be the scientific explanation for a map that shows Antartica as it existed before it was covered with ice? Before recorded history? Again,left over information from before the flood destroyed the earth and all its civilizations?

The map was found in the 1500’s and according to writing on the map itself, was compiled from earlier maps dating back to the 300’s.

The true mysteries of of this map were eventually discovered by professor Charles H. Hapgood and revealed to the scientific community in his book, “Maps of the Ancient Sea Kings”.

During scrutiny of the map, Hapgood discovered a partial charting of Antarctica, made during a period when the coast was free of ice. This coastal structure, now covered again by ice, was subsequently verified by satellite radar scanning. Ice core samples of the coastline have fixed the last ice-free period to between 11,000 B.C. and 4,000 B.C.

Our historical understanding of navigation includes a period of time before which it was impossible to determine a ships latitude (North to South position) in the Southern Hemisphere. This was because the known method involved sighting the angle of the only fixed star – the North Star – which cannot be seen in the Southern Hemisphere because of the curviture of the Earth.

Despite this handicap, these maps show amazing details and acurate latitude placement of many known islands along the southern most coastlines of Antarctica! But this paradox of history was made even more astounding.

Hapgood has proved that the Piri Re’is map is plotted out in plane geometry, containing latitudes and longitudes at right angles in a traditional “grid”; yet it is obviously copied from an earlier map that was projected using spherical trigonometry! Not only did the early map makers know that the Earth was round, but they had knowledge of its true circumference to within 50 miles! http://s8int.com/page5.html

Look at the region in the map. . . . . . This map is accurate beyond any capabilities without ariel transportation. It is no coincidence that this map covers between Peru to Egypt.

The evidence points to Egypt and Peru having an inter Continental Airport system. This best explains the Piri Reis map. Without this view it ignores the HARD evidence. This is the best explanation as to how the Piri Reis map was made with little effort.