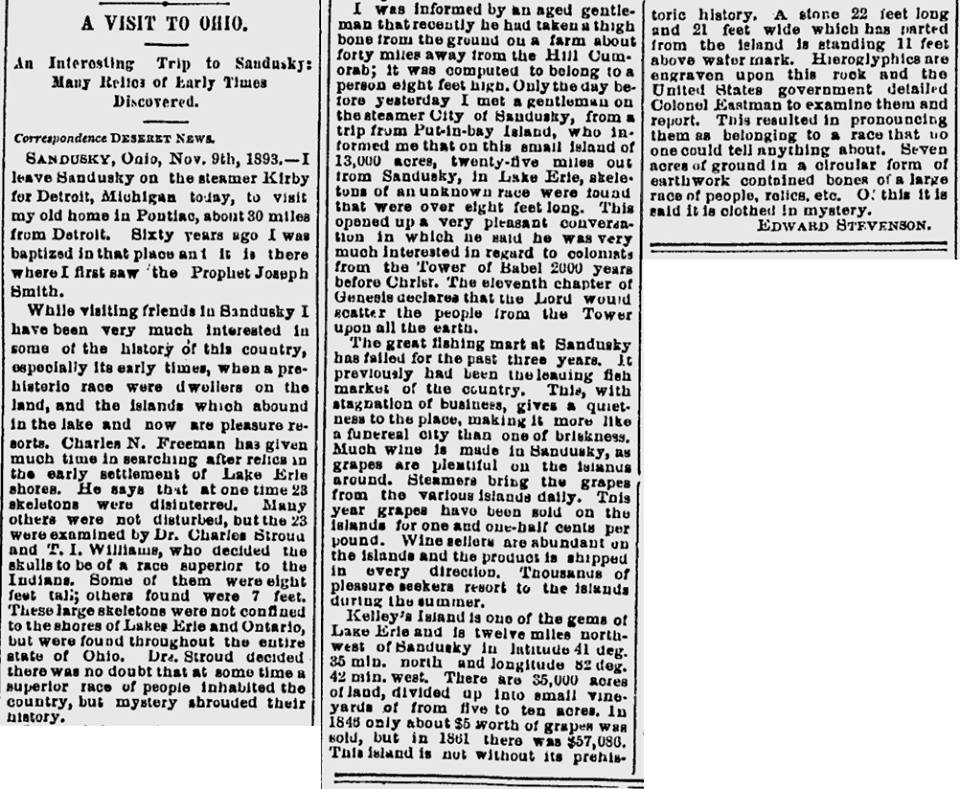 A visit to Ohio – An Interesting Trip to Sandusky: Many Relics of Early Times Discovered. – Correspondence Deseret News. Sandusky Ohio, November 9th, 1893. – I leave Sandusky on the steamer Kirby for Detroit, Michigan today, to visit my old home in Pontiac, about 30 miles from Detroit.  Sixty years ago I was baptized in that place- ??? It is there that I first saw the prophet Joseph Smith.

While visiting friends in Sandusky I have been very much interested in some of the history of this country, especially its early times, when a prehistoric race were dwellers on the land, and the islands which abound in the lake and now are pleasure resorts. Charles N. Freeman has given much time in searching after relics in the early settlements of Lake Erie Shores. He says

that at one time 23 skeletons were disinterred, Many others were not disturbed, but the 23 were examined by Dr Charles Stroud and T.I. Williams, who decided the skulls to be of a race superior to the Indians. Some of them were eight feet tall; Others found were 7 feet. These large skeletons were not confined to the shores of  Lake Erie and Ontario, but were found throughout the entire state of Ohio. Dr. Stroud decided there were no doubt that at some time a superior race of people inhabited the country, but mystery shrouded their history.

I was informed by an aged gentleman that recently he had taken a thigh bone from the ground on a farm  about 40 miles away from the hill -Gamorah?- ; It was computed to belong to a person eight feet high. Only the day before yesterday I met a gentleman on a steamer, City of Sandusky, from a trip from -Put-in-bay?- Island, who informed me that on this small island o 13,000 acres, twenty five miles out from Sandusky, in Lake Erie, skeletons of an unknown race were found that were over eight feet long. This opened up a very pleasant conversation in which he said he was very much interests in regard to colonists from the Tower of Babel 2000 years before Christ. The eleventh chapter of Genesis declared that the lord would scatter the people from the tower upon all the Earth.

The great fishing mart at Sandusky has failed for the past three years. It previously had been the leading fish market of the country. This, with the stagnation of business, gives a quietness to the place, making it more like a funeral city than one of business. Much wine is made in Sandusky, as grapes are plentiful on the island around. Steamers bring the grapes from the various islands daily. This year grapes have been sold on the islands for one and one half cents per pound. Wine sellers are abundant on the islands and the product is shipped in every direction. Thousands of pleasure seekers resort to the islands during the summer.

Kelly’s Island is one of the gems of Lake Erie and is twelve miles Northwest of Sandusky in lattitude 82 deg. 43 Min. West. There are 35,000 acres of land, divided up into small vineyards of from five to ten acres. In 1845 only about $5 worth of grapes was sold, but in 1861 there was $57,086. This island is not without its pre-historic history. A stone 22 feet long and 21 feet wide which was parted from the island is standing 11 feet above water mark. Heiroglyphics are engraven upon this rock and the United States government detailed Colonel Eastman to examine them and report. This resulted in pronouncing them as belonging to a race that no one could tell anything about. Seven acres of ground in a circular form of earthwork contained bones of a large race of people, relics etc. Of this it is said it is clothed in mystery. ~Edward Stevenson.