The last were persons of great size, being not less than six and a half feet high.

A mound similar to the last at the site of the former county, Palestine, or ‘Old Palestine’. as it is called, was explored in 1870, by Messrs. Newland, Dodd, and Houston. On the surface of the hill a confused mass of stones, such as a man could conveniently carry, were noticed indicating a circular wall twenty feet in diameter. It was found to be a vaulted tomb. The first or upper vault contained the bones of many women and children; a layer of flat stones divided this from the second which contain the bones of men; another layer of flags, and at the bottom, six feet below the surface, two skeletons were found with their heads placed to the east and faces to the north. The last were persons of great size, being not less than six and a half feet high. 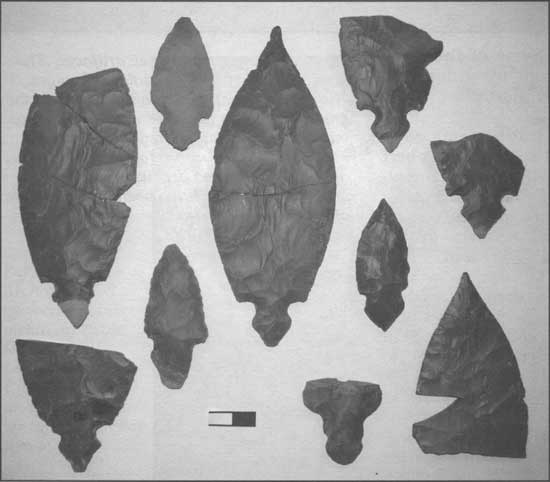 Archeological evidence for Giants: Turkey-tails from sites in the hill country. The larger specimens are reconstructed from fragments surface collected over many years from a site in Orange County that were donated to the Glenn A. Black Laboratory of Archaeology. the flint-knappers who crafted the Turkey-tail cache blades were experts at using the methods for controlling the thinning and shaping process and would have required greater than average skill.

Here we have a mystery that needs to be solved. Here we are looking for Giants from Each county. Well what about counties that do not exist anymore? Palestine County, not to be confused with Palestine, the city. Palestine the city is in Hancock County. Hancock County is not the location because that county does not even border Lawrence, Orange or Monroe. These three counties transverse ‘Palestine county’. There is a one in three chance that these giants were located in Orange county, but then again the article talks of two locations which is a second one in three chance. We need to get an old map of Palestine, we need to know the exact location of these two mounds. It is quite possible that these mounds no longer exist as mounds.