“One of the largest bats ever discovered” 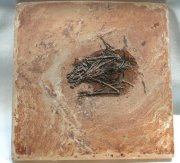 Giant Bats out of Africa

Giant bats: ” When most of us think of Ancient Egypt, visions of pyramids and mummies fill our imaginations. For a team of paleontologists interested in fossil mammals, the Fayum district of Egypt summons an even older and equally impressive history that extends much further back in time than the Sphinx.

In a recent issue of the Journal of Vertebrate Paleontology, scientists report on the discovery of six . . . bat species . . ..  which sheds new light on . . . early. . .  bats.

It took over 25 years of fieldwork to collect the 33 specimens that form the basis of the new study. That translates to a little over one specimen per year a lot of effort for a single fossil, said Erik Seiffert, a paleontologist at Stony Brook University. But it shows just how important patience and long term field programs are to science. Our long-term commitment to field work certainly paid off in this case. Among the new species is a giant among bats;

though weighing in at less than a half-pound,

it is one of the largest bats ever discovered,

said Greg Gunnell, a paleontologist at the University of Michigan.

Fossil bats of Eocene . . .(layer)  are rare in Africa. Only a few fragmentary remains from Egypt, Morocco, Tanzania and Tunisia were previously known. The discovery of six new kinds of bats illustrates the remarkably rich, and previously unsuspected, diversity of bats in Africa 3. . . .. These discoveries provide important new information for understanding . . . . modern bat families.

. . . . Seiffert noted that the Fayum bats include members of the most common and widespread group of living bats, Clearly the modern bat families have very ancient origins, and at least some of them probably originated in Africa

Gunnell hopes that  we can come to understand the history of how bats came to be so intertwined within our ecosystem, then we can begin to appreciate them instead of fear them as many people seem to do.