One of 3 Giant Ant Species 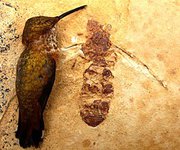 “The ant was nearly the size of a hummingbird, shown beside it for comparison. Simon Fraser University

The fossil of a gigantic ant, similar to ones that lived . . . .  in Europe, has been found for the first time in North America.

The winged queen ant collected in the Green River Formation in Wyoming is “about the size of a small bird — about the body mass of a small bird as well,” said Bruce Archibald, the Simon Fraser University researcher who identified it. “It’s pretty impressive.”

Archibald, who specializes in studying fossil insects, is lead author of a paper about the ant published this week in Proceedings of the Royal Society B.

When Archibald visited the museum, curator Kirk Johnson decided to take advantage of his expertise and showed him some unidentified specimens.

Archibald realized one of them closely

No such whole fossils had been found in North America before,

The climate in both Germany and Wyoming during the Early Eocene

“like the kind of heat you’d find today in Panama or Central America,” Archibald said.

The similar fossils on both sides of the Atlantic suggest giant ants somehow travelled between Europe and North America.

On one hand, that was plausible because there was a land bridge near Greenland connecting the two continents. There was just one problem — it wasn’t very hot there.

“The mystery is how [they] could have passed through this temperate climate region,” Archibald said.

. . . . “A physiological gate of climate could have opened periodically and allowed tropical adapted organisms to pass between continents,” Archibald said.

Similarly, he said, recent reports of dragonflies in northern Canada, where they haven’t been seen before, suggests that insects can expand their ranges in response to climate change in a very short amount of time.