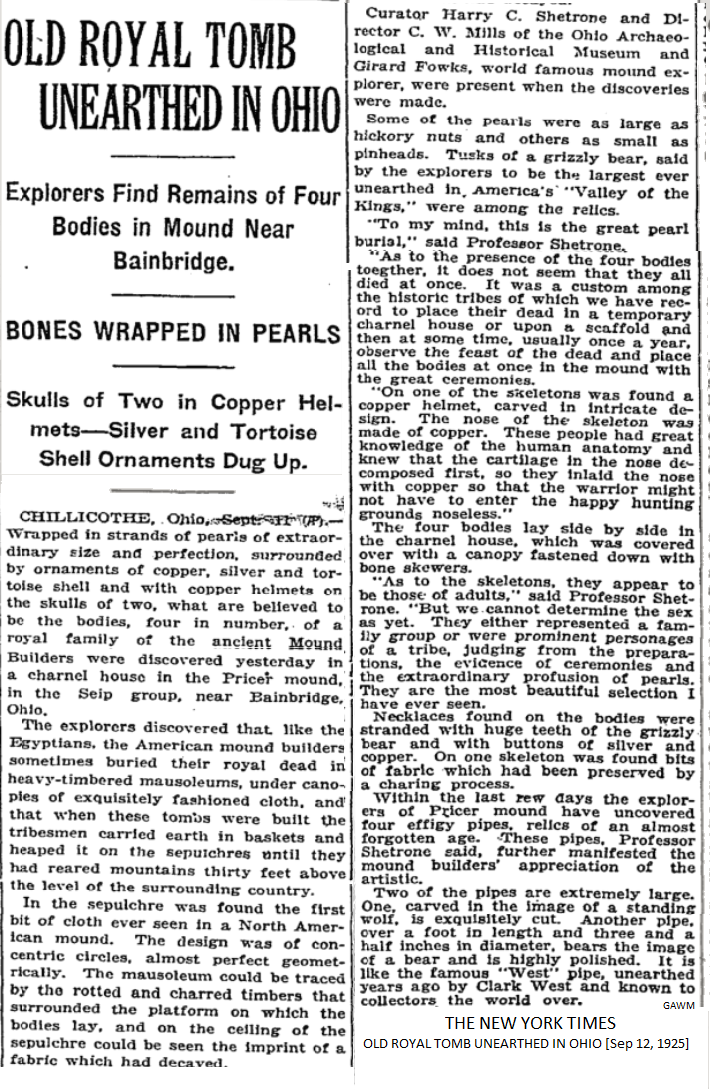 CHILLICOTHE, Ohio, Sept. 11 (AP). — Wrapped in strands of pearls of extraordinary size and perfection, surrounded by ornaments of copper, silver and tortoise shell and with copper helmets on the skulls of two, what are believed to be the bodies, four in number, of a royal family of the ancient Mound Builders were discovered yesterday in a charnel house in the Pricer mound, in the Seip group, near Bainbridge, Ohio.
The explorers discovered that like the Egyptians, the American mound-builderss someties buried their royal dead in heavy-timbered mausoleums under canopies of exquisitely fashioned cloth, and that when these tombs were built the tribesmen carried earth in baskets and heaped it on the sepulchures until they had reared mountains thirty feet above the level of the surrounding country.
In the sepulchure was found the first bit of cloth ever seen in a North American mound. The design was of concentric circles, almost perfect geometrically. The mausoleum could be traced by the rotted and charred timbers that surrounded the platform on which the bodies lay, and on the ceiling of the sepulchure could be seen the imprint of a fabric which had been decayed.
Curator Harry C. Shetrone and Director C. W. Mills of the Ohio Archaeological and Historical Museum and Girard Fowks, world famousmound explorer, were present when the discoveries were made.
Some of the pearls were as large as hickory nuts and others as small as pinheads. Tusks of a grizzly bear, said by the explorers to be the largest ever unearthed in America’s “Valley of the Kings,” were among the relics.
“To my mind, this is the great pearl burial,” said Professor Shetrone.
“As to the presence of the four bodies together, it does not seem that they all died at once. It was a common custom among the historic tribes of which we had record to place their dead in a temporary charnel house or upon a scaffold and then at some time, usually once a year, observe the feast of the dead and place all the bodies at once in the mound with the great ceremonies.
“On one of the skeletons was found a copper helmet, carved in intricate design. The nose of the skeleton was made of copper. These people had great knowledge of the human anatomy and knew that the cartilage in the nose decomposed first, so they inlaid the nose with copper so that the warrior might not have to enter the happy hunting grounds noseless.”
The four bodies lay side by side in the charnel house, which was covered over with a canopy fastened down with bone skewers.
“As to the skeletons, they appear to be those of adults,” said Professor Shetrone. “But we cannot determine the sex as yet. They either represented a family group or were prominent personages of a tribe, judging from the preparations, the evidence of ceremonies and the extraordinary profusion of pearls. They are the most beautiful selection i have ever seen.
Necklaces found on the bodies were stranded with huge teeth of the grizzly bear and with buttons of silver and copper. On one skeleton was found bits of fabric which had been preserved by a charring process.
Within the last few days the explorer of Pricer mound have uncovered four effigy pipes, relics of an almost forgotten age. These pipes, Professor Shetrone said, further manifested the mound builders’ appreciation of the artistic. 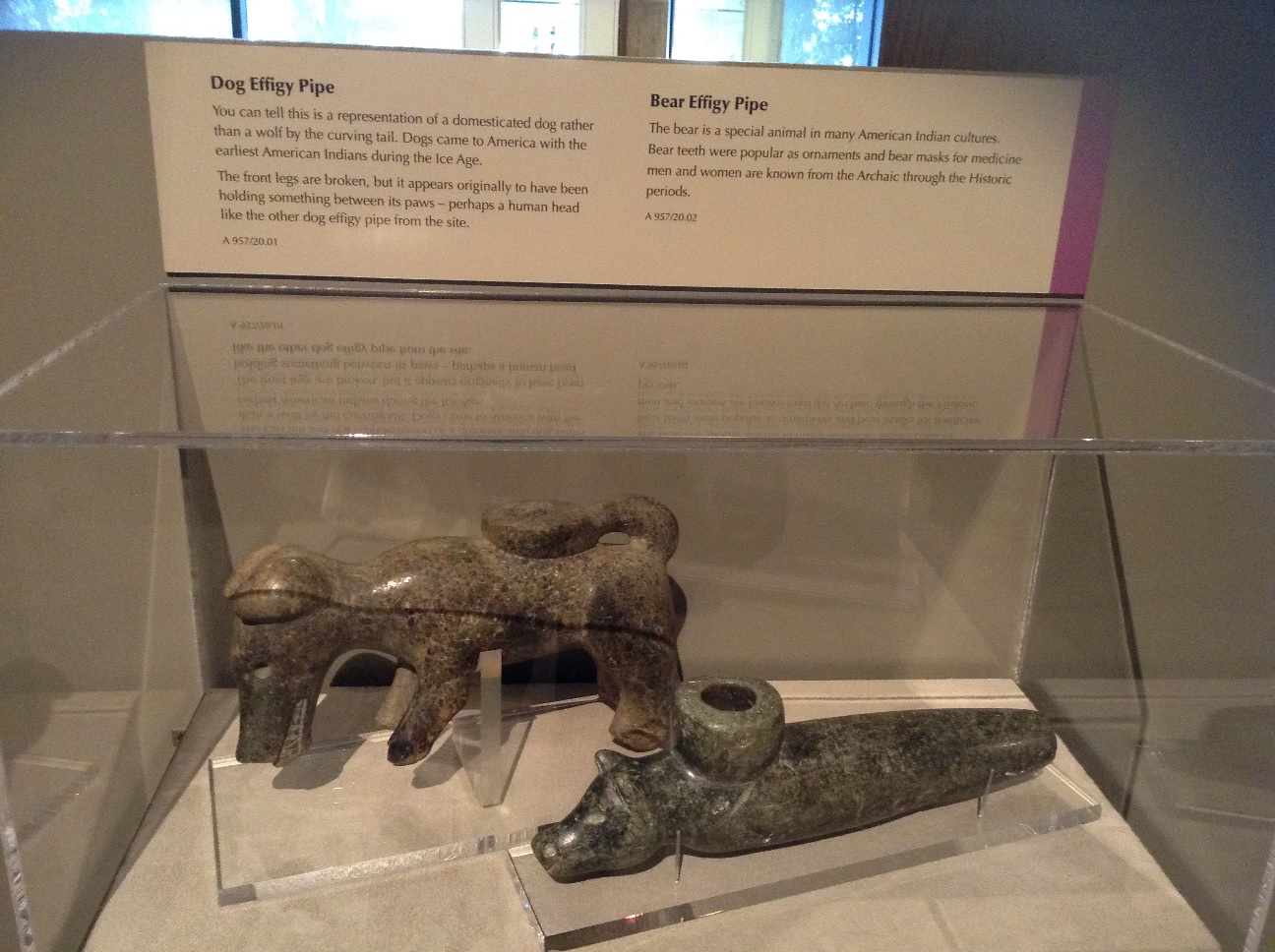 Two of the pipes are extremely large, One carved in the image of a standing wolf, is exquisitely cut. Another pipe over a foot in length and three and a half inches in diameter, bears the image of a bear and is highly polished. It is like the famous “West Pipe”, unearthed years ago by Clark West and known to collectors the world over.