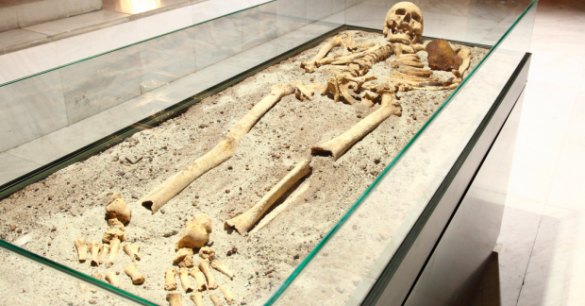 A Spanish-language report featured recently by RT has described the discovery of ancient human skeletons in Russia in a Bronze-age burial site containing four bodies, each purportedly eight-feet in length.

The report, posted on October 14, 2014, describes that similar bodies were supposedly found, possibly of even larger stature, in the same location: 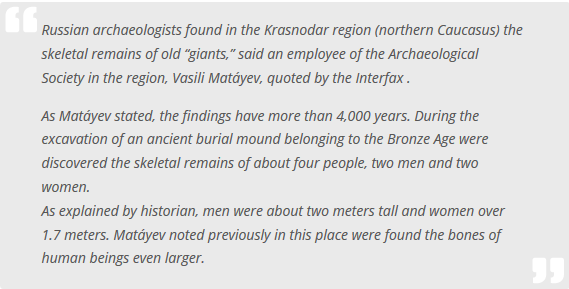 Hopefully more information on this find will come to the surface.

It must be very difficult to carry the burden of evolutionary theory. You must maintain a false mantle of superiority while balancing a tethered view fantastical storytelling which runs contrary to evidence, while labeling anyone a conspiracist or radical against your view. How do you politically step outside of science into the very definition of supernaturalism, when it is a supernaturalism that you build upon? How is it that conspiracist is the label you give your opponents when everyone by your order is conspired against you. There are giants found in every state, did the peer review people of the day conspire against evolution? Did the New York Times the Washington Post, Geological surveys, Most County Histories, Native Americans, Mormons, Christians, Jews, Muslims, all local news papers, Independent researchers, scientists from every field, are all of these conspiring against your reality?

Here we have a case of international conspiracy from Russia to add another layer to that tin-foil hat use to cover their eyes and mind for their own brand of conspiracy that goes without equal.