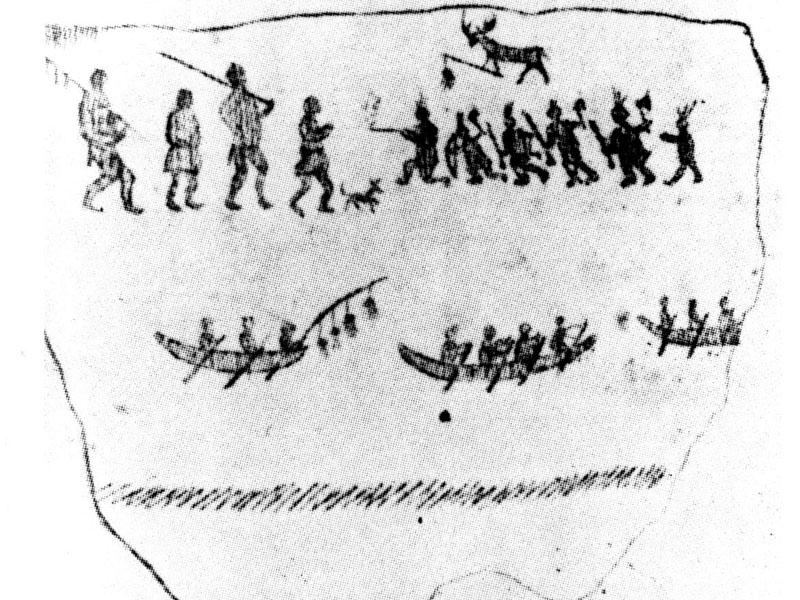 “Under pressure by Georgia, Creeks ceded their lands east of the Ocmulgee River in the Treaties of New York (1790), Fort Wilkinson (1802), and Washington (1805). Okonee and Tamatli

In the early spring of 1541 de Soto’s army traveled from the Florida Panhandle to Middle Georgia. Its officers immediately noted that the peoples in that region were more advanced culturally and averaged a foot taller than the Spanish. These were the Okonee and Tamatli branches of the Muskogean Culture – ancestors of the Creek Indians. The Spanish called them Los Indios Gigantes . . . the Giant Indians. De Soto’s chroniclers claimed that some Great Suns (Chief Priests) of the ancestral Creek provinces were more than seven feet tall.”

Both these town sites were ancestral to the Creek Indians, so the stories of the Spanish are quite plausible. Creek men today, especially in northern Alabama and Georgia, tend to be exceptionally tall.”

This is a painting by the Creek Indians. Notice the size of the people in the foreground, if perspective is right and it probably is, both tribes in the background are giants. The Giants of the upper left are twice the size of the Indians on the right and 3 times the size of the men in the boats in the foreground. There are some strange aspects to the painting, for instance it would appear that the deer at the top is fishing, the giant Indians at the right have been supplied with guns, and that is one magnificent fishing pole that has 4 lures on one pole. Another peculiar detail is the gait of the giants on the left, it’s very different than the average human gait. Here we have an early painting of giant Indians fighting on the shore as normal size Indians watch from the safety of their boats.