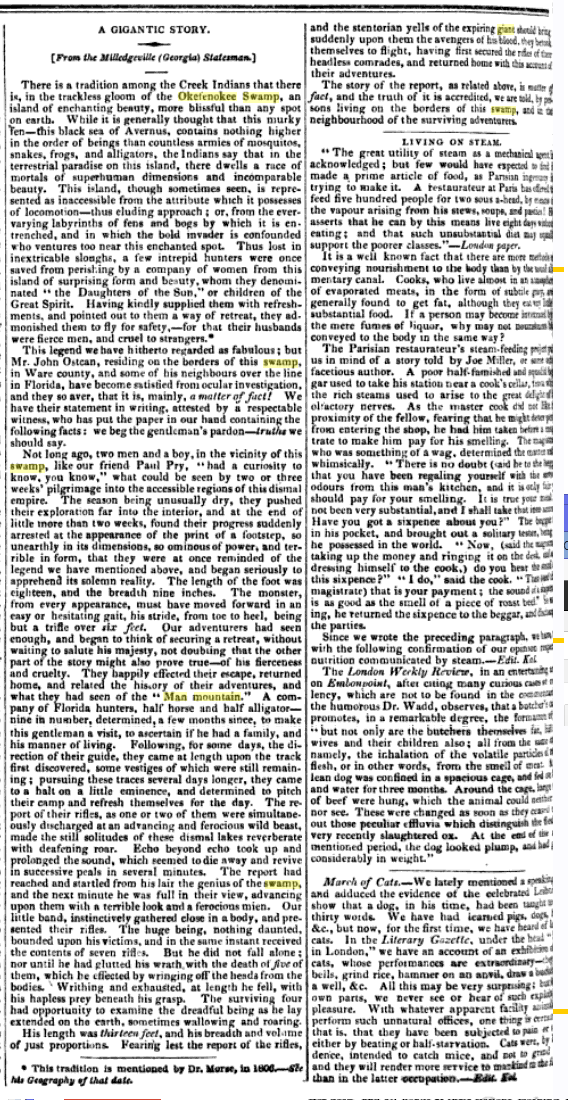 [From the Milledgeville (Georgia) Statesman]

There is a tradition among the Creek Indians that there is, in the trackless gloom of the Okefenokee Swamp, an island of enchanting beauty, more blissful than any spot on earth. While it is generally thought that this murky -this black sea of Avernus, contains nothing higher in the order of beings than countless armies of mosquitos, snakes, frogs, and alligators, the Indians say that in the terrestrial paradise on this island, there dwells a race of mortals of superhuman dimensions and incomparable beauty. This island, though sometimes seen, is represented as inaccessible from the attribute which it possesses of locomotion-thus eluding approach: or, from the evervarying labyrinths of fens and bogs by which it is entrenched, and in which the bold invader is confounded who ventures too near this enchanted spot. Thus lost in inextricable sloughs, a few intrepid hunters were once saved from perishing by a company of women from this island of surprising form and beauty, whom they denominated “the daughters of the Sun,” or children of the Great Spirit. Having kindly supplied them with refreshments, and pointed out to them a way of retreat, they admonished them to fly for safety,-for that their husbands were fierce men, and cruel to strangers.”

This legend we have hitherto regarded as fabulous; but Mr. John Ostcan, residing on the borders of the swamp, in Ware county, and some of his neighbors, over the line in Florida, have become satisfied from ocular investigation, and they so aver, that it is, mainly, a matter of fact! We have their statement in writing, attested by a respectable witness, who has put the paper in our hand containing the following facts: we beg the gentlemen’s pardon-truths we should say. Okeefenokee Giants

Not long ago, two men and a boy, in the vicinity of this swamp, like our friend Paul Pry, “had a curiosity to know, you know,” what could be seen by two or three weeks’ pilgrimage into the accessible regions of this dismal empire. The season being unusually dry, they pushed their exploration far into the interior, and at the end of little more than two weeks, found their progress suddenly arrested at the appearance of the print of a footstep, so unearthly in its dimensions, so ominous of power, and terrible in form, that they were at once reminded of the legend we have mentioned above, and began seriously to apprehend its solemn reality. The length of the foot was eighteen, and the breadth nine inches. The monster from every appearance, must have moved forward in an easy or hesitating gait, his stride, from toe to heel, being but a trifle over 6 feet. Our adventures had seen enough, and began to think of securing a retreat, without waiting to salute his majesty, not doubting that the other part of the story might also prove true-of his fierceness and cruelty. They happily affected their escape, returned home, and related the history of their adventures, and what they had seen of the “Man mountain.” A company of Florida hunters, half horse and half alligator-nine in number, determined, a few months since, to make this gentleman a visit, to ascertain if he had a family, and his manner of living. Following for some days, the direction of their guide, they came at length upon the track first discovered, some vestiges of which were still remaining; pursuing these traces several days longer, they came to a halt on a little eminence, and determined to pitch their camp and refresh themselves for the day. The report of their rifles, as one or two of them were simultaneously discharged at an advancing approaching wild beast, made the still solitudes of these dismal lakes reverberate with deafening roar. Echo beyond echo took up and prolonged the sound, which seemed to die away and revive in successive peals in several minutes. The report had reached and startled from his lair the genius of the swamp, and the next minute he was full in their view, advancing upon them with a terrible look and a ferocious mien. Our little band, instinctively gathered close in a body, and presented their rifles. But he did not fall alone; nor until he had glutted his wrath with the death of five of them, which he effected by wriggling off the heads from the bodies. Writhing and exhausted, at length he fell, with his hapless prey beneath his grasp. The surviving four had opportunity to examine the dreadful being as he lay extended on the earth, sometimes wallowing and roaring.

His length was 13 feet, and his breadth and volume of just proportions. Fearing lest the report of the rifles, and the stentorian yells of the expiring giant should bring suddenly upon them the avengers of his blood, they bring themselves to flight, having first secured the of their headless comrades, and returned home with this account of their adventures.

The story of this report, as related above, is matter of fact, and the truth of it is accredited, we are told, by persons living on the borders of this swamp, and in this neighborhood of the surviving adventurers.