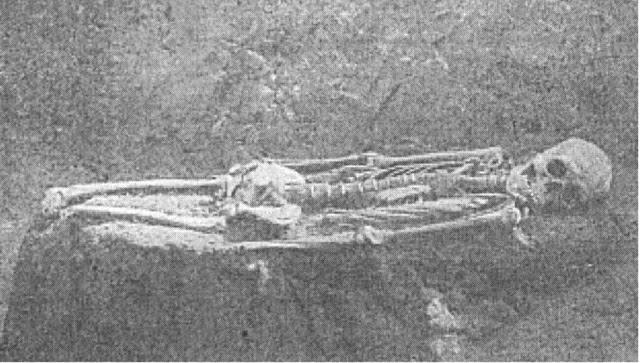 “9th September: The next morning, we drove to Serpent Mound after an awesome breakfast cooked up by Roy. We aimed to get there on this particular day because local residents were displaying artifacts discovered on there land. We drove up the track to Serpent Mound and I was immediately drawn to a particular mound that was about 5 ft high and 15ft wide. I went to dowse it and found three energy currents meeting at its apex.

I later found out that a giant skeleton had been unearthed from the mound, that was rediscovered printed on an old postcard with a note saying it was 7ft tall. However the skeleton had its shins and feet missing, so it could easily have been 8 ft. This was yet another stunning piece of evidence that the Giants were here in Ohio.” Ohio Postcard

We are always looking for assistance to follow up with stories, in this case we have a postcard, and i suspect there are many more postcards concerning giants 7 and 8 feet in height. If you know of any others we would like for you to contact us, simply message us. You can see the origianal postcard of this seven foot giant in the Greater Ancestors World Museum in Jacksonville Florida.

Other accounts in this county: