Oacoma, more than an 8 footer 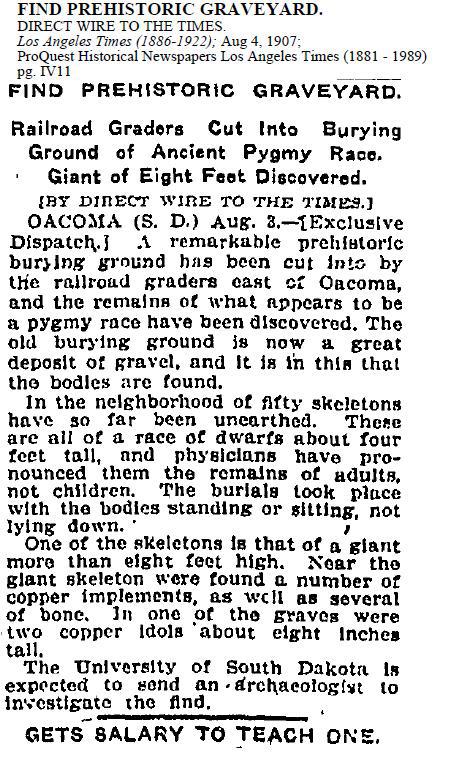 Oacoma, more than an 8 footer

{BY DIRECT WIRE TO THE TIMES}

Oacoma (S. D.) Aug. 3.-{Exclusive Dispatch.} A remarkable prehistoric burying ground has been cut into by the railroad graders east of Oacoma, and the remains of what appears to be a pygmy race have been discovered. The old burying ground is now a great deposit of gravel, and it is in this that the bodies are found.  In the neighborhood of fifty skeletons have so far been unearthed. These are all of a race of dwarfs about four feet tall, and physicians have pronounced them the remains of adults, not children.

The burials took place with the bodies standing or sitting, not lying down.

One of the skeletons is that of a giant more than eight feet high. Near the giant skeleton were found a number of copper implements, as well as several of bone. In one of the graves were two copper idols about eight inches tall.

The University of South Dakota is expected to send an archaeologist to investigate the find.

DIRECT WIRE TO THE TIMES