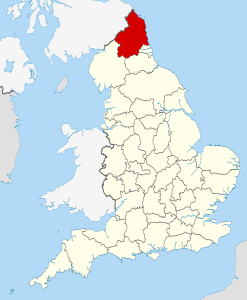 The banks of the Cor being worn away by some impetuous land-floods, there was discovered, about the year 1660, a skeleton, conjectured to be that of a man, of extraordinary and prodigious size. The length of the thigh-bone was nearly six feet, and the skull, teeth, and other parts, proportionately monstrous: so that the length of the whole body was computed at 21 feet!

Some parts of it were in the possession of the Earl of Derwentwater, in 1693. A singularly large bone found here, was in the kitchen of the Old George Inn, in the flesh-market, New castle, for many years. The bone was purchased by the proprieter of the Keswick Museum, where it is shown as the rib of a giant Cor, found at Corbridge: beings for whom the Earth would seem unsuitable to tread upon.

History has given examples of gigantic human remains, progressively decreasing from 30 feet to 10 feet in height: living giants have seldom exceeded seven feet in height. . .