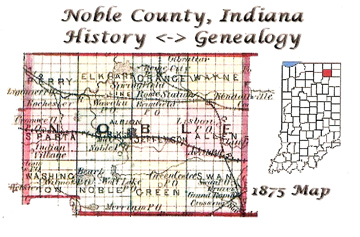 Noble County was formed in 1836. It was named for Governor Noah Noble. The original settlers in Noble County were settlers from New England known as “Yankee’s”, these were people descended from the English Puritans who settled New England in the 1600s. Elkhart Township on what is called Sanford’s Point, there are several mounds,  one of which was opened some seven or ten years ago by the neighbors, who expected to unearth some valuable trinkets. Quite a number of bones were found, and these were scattered around on the surface of the ground., where they were left. No trinkets were found, an inferior maxillary bone found is said to have been remarkably large and sound.

“Some workmen while digging in a piece hilly woodland discovered a curiously shaped stone that extended about four feet below the surface and bearing heiroglyphic characters. Curiously prompted the workmen to remove this stone cover from the vault, which was found to be circular in shape. The stone cover was six inches in thickness. In the stone grave was the remains of a skeleton approximately the stature of a giant, and in primitive times no doubt he occupied a commanding position, judging from the care that had been given in building a stone sepulcher and the metal and stone ornaments found about this prehistoric human skeleton. The copper ornaments on this aboriginal giant almost cover the giant almost cover the skeleton. The characters on the stone cover resemble the phonetic or queer heiroglyphic symbols on the stones of Aztec ruins in Mexico, Central America and Yucatan.”

A Number of years ago M.F Owen excavated a mound situated in a piece of woodland, on the east shore of the “West Lake”: on the north side of the old highway. On this mound had grown a large white oak tree, which, having just having been felled showed a growth of between 300 and 400 years. Among the roots of the tree were unearthed a skeleton in a sitting posture, facing west, the bones of which crumbled rapidly when exposed to air. There was found and preserved a root which had grown apparently into the ear orafice of the skull, afterwards emerging through the eye, and firmly attached thereto is a well preserved piece of the forntal bone, showing great development above the eyes.

The Island Park Assembly, which was continued for many years, and an account of which may be found in Chapter LXI of this volume, brought considerable business to Rome City, and caused the building of various stores, restaurants and hotels.  In 1880 M. F. Owen and P. S. O’Rourke put up a restaurant building and operated a restaurant therein during the summers of 1880 and 1881.  Then Mr. Owen bought his partner’s interest, and, having moved the building, made it into a residence for himself.  After further improvements, it was burned down in 1885.  In the following year Mr. Owen sold the west part of the lot to Mark E. Smurr, who built on it and operated a hotel and barber shop.  It afterwards underwent several changes, and passed through several hands until it came into those of Mr. Owen, who is now operating it as a hotel and restaurant.  The Park Hotel, on the island, the Spring Beach Hotel and the Assembly Hotel, which was controlled by the Island Park Association, were, or have been for years popular places of accommodation for visitors.  In 1880 Eden H. Fisher built a dance hall on the north side of Front Street, which was afterwards enlarged and made into a hotel.  It was bought about 1885 by Josephus Burnett, who conducted it as the Burnett House.  Later the upper part was occupied by the Knights of Pythias as a lodge room, and, after their removal to new quarters, by the Masons of Lodge 451.  The last mentioned lodge was instituted in June, 1872, and received its charter in May the following year.  Orange Chapter, Order of the Eastern Star, was constituted in January, 1899, and a large number of members have been since admitted.