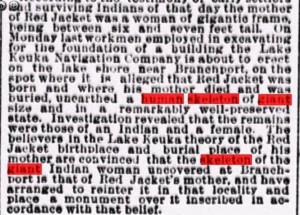 . . . and surviving Indians of that day the mother of Red Jacket was a woman of gigantic frame, being between six and seven feet tall. On Monday last workmen employed in excavating for the foundation of a building the Lake Kouka Navigation Company is about to erect on the lake shore near Branchport on the spot where it is alleged that Red Jacket was born and where his mother died and was buried, unearthed a human skeleton of giant size and in a remarkably well-preserved state. Investigation revealed that the remains were those of an Indian and a female. The believers in the Lake Keuka theory of the Red Jacket birthplace and burial place of his mother are convinced that the skeleton of the giant Indian woman uncovered at Branchport is that of Red Jacket’s mother, and have arranged to reinter it in the locality and place a monument over it inscribed in accordance with that belief.  New York Giants New York Giants 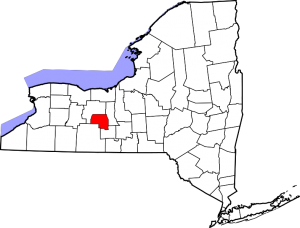 In this story there are two possibilities: