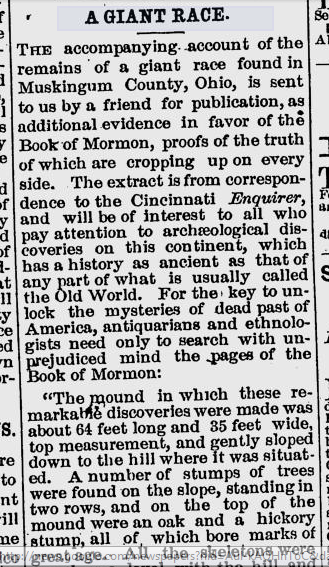 The accompanying account of the remains of a giant race found in Muskingum County, Ohio, is sent to us by a friend for publication, as additional evidence in favor of the Book of Mormon, proofs of the truth of which are cropping up on every side. The extract is from correspondence to the Cincinnati Enquirer, and will be of interest to all who pay attention to archaeological discoveries on this continent, which kas a history as ancient as that of any part of what is usually called the Old World. For the key to unlock the mysteries of dead past of America, antiquarians and ethnologists need only to search with unprejudiced mind the pages of the Book of Mormon. The mound in which these remarkable discoveries were made was about 64 feet long and 35 feet wide, top measurement, and gently sloped down to the hill where it was situated. A number of stumps of trees were found on the slope, standing in two rows, and on top of the mound were an oak and a hickory stump, all of which bore marks of great age. All the skeletons were . . . (This article is a stub) 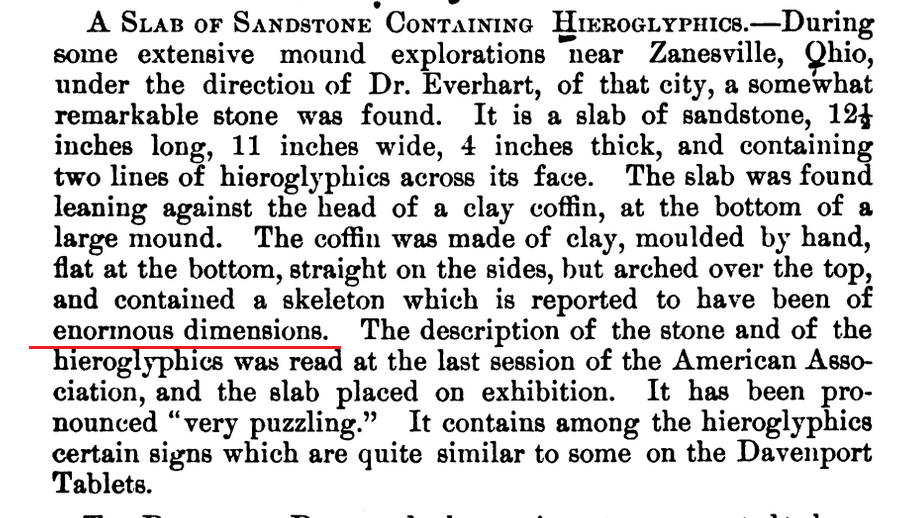 11) American Antiquarian, Volume 3, 1880. A skeleton which is reported to have been of enormous dimensions, was found in a clay coffin, with a sandstone slab containing heiroglyphicsduring mound explorations by Dr. Everhart near Zanesville, Ohio.

We the undersigned citizens of Brush Creek Township, having been present and taken part in the above excavations, do certify that the statements herewith set forth are true and correct, and in no particular has the writer deviated from the facts in this case.

12) History of Muskingum County, Ohio 1882. Payson Farm. “there once undoubtedly existed here a more enlightened race of human beings than that of the Indians. six feet six inches in length.