INDIAN MUMMY
Dug Out of a Cellar en Elkwell Creek.
Kentucky Skeleton of a Man Eight Feet High.
Lexington, Ky., Nev. 9. Jehn Winter,
of Bell county, last week, while
digging a cellar at his home, on Elkwell
creek, excavated a giant mummy. The
mummy was that of a man eight feet
high, and wrapped in a winding cloth of
skins. It was placed in a canoe-like
coffin, and crumbled away upon being
exposed the air. At the head of the
giant were a stone hatchet and a few
cooking utensils and a large hollow
stone, which presumably contained
feed. At his feet was a skin shield,
which had also crumbled to dust. 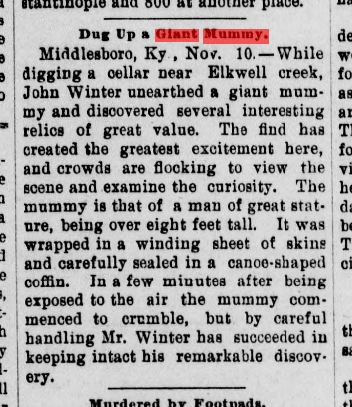 Dug up a Giant Mummy

Middlesboro, Ky, Nov. 10. – While digging a cellar near Elkwell Creek, John Winter unearthed a giant mummy and discovered several interesting relics of great value. The find has created the greatest excitement here, and crowds are flocking to view the scene and examine the curiosity. The mummy is that of a man of great stature, being over eight feet tall. It was wrapped in a winding sheet of skins, and carefully sealed in a canoe shaped coffin. In a few minutes after being exposed to the air the mummy commenced to crumble. but be careful handling Mr. Winter has succeeded in keeping intact his remarkable discovery. 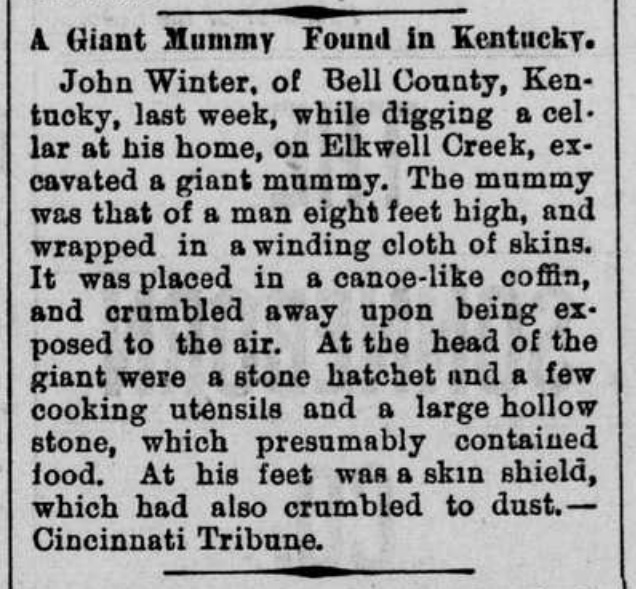