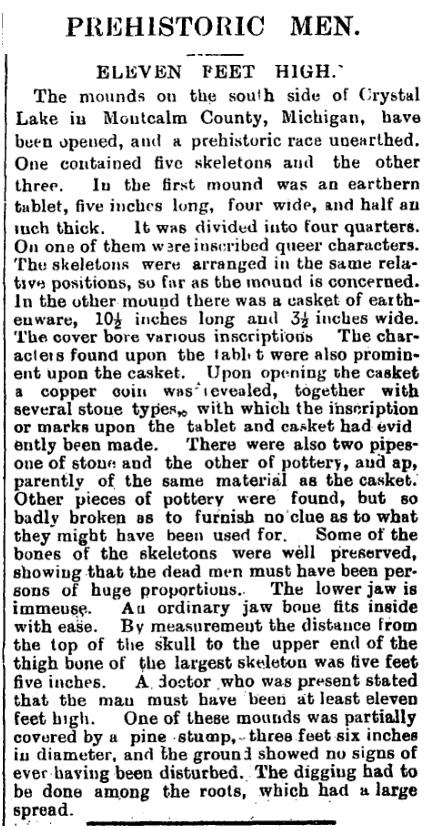 The mounds on the south side of Crystal Lake in Moutcalm County, have been opened, and a prehistoric race unearthed. On contained five skeletons and the other three. In the first mound was an earthen tablet, five inches long, four wide, and half an inch thick. It was divided into four quarters. On one of them were inscribed queer characters. The skeletons were arranged in the same relative positions, so far as the mound is concerned. In the other mound is a casket of earthenware, 10 1/2 inches long and 3 1/2 inches wide. The cover bore various inscriptions. The characters found upon the tablet were also prominent upon the casket. Upon opening the casket a copper coin was revealed, together with several stone types with which the inscriptions or mark upon the tablet and casket had eventually been made. There were also two pipes one of stone and the other of pottery, and apparently of the same material as the casket. Other pieces of pottery were found, but so badly broken as to furnish no clue as to what they might have been used for. Montcalm County

Some of the bones of the skeletons were well preserved, showing that the dead men must have been persons of huge proportions. Montcalm County

The lower jaw is immense.

An ordinary jaw bone fits inside with ease. By measurements the distance from the top of the skull to the upper end of the thigh bone of the largest skeleton was five feet five inches. Montcalm County

A doctor who was present states that the man

must have been at least 11 feet high.

One of these mounds  were partially covered by a pipe stump, three feet six inches in diameter, and the group showed no signs of ever having been disturbed. The digging had to be done among the roots, which had a large spread. Montcalm County