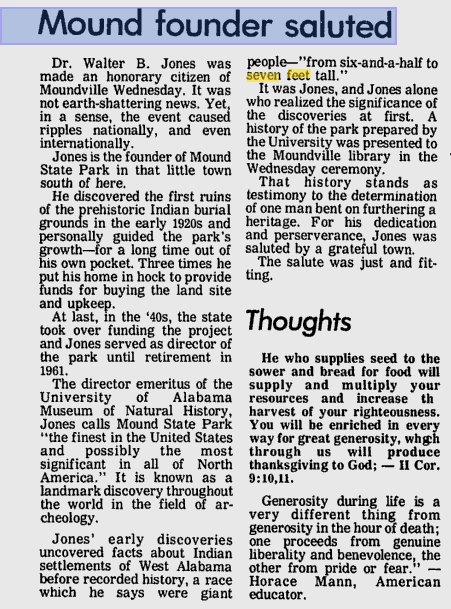 Dr. Walter B. Jones was made an honorary citizens of Moundville Wednesday. It was not earth-shattering news. Yet, in a sense, the event caused ripples nationally, and even internationally.

Jones is the founder of Mound State Park in that little town south of here.

He discovered the first ruins of the prehistoric Indian burial grounds in the early 1920’s and personally guided the park’s growth – for a long time out of his own pocket. Three times he put his home in hock to provide funds for buying the land site and upkeep.

At last, In the 40’s the state took over funding the project and Jones served a

s director of the park.  until retirement in 1961.

The director emeritus of the University of Alabama Museum of Natural history. Jones calls Mound State Park, “the finest in the United States and possibly the most significant in all of North America. It is known as a landmark discovery throughout the world in the field of archaeology.

a race which he said were people- “from six and a half to seven feet tall.”

It was Jones, and Jones alone who realized the significance of the discoveries at first. A history of the park prepared by the University was presented to the Moundville Library in the Wednesday ceremony.

That history stands as testimony to the determination on one man bent on furthering a heritage. For his dedication and perserverance, Jones was saluted by a grateful town. This salute was just and fitting.