Mounds of men of Gigantic Stature in Ohio

There were mounds situated in the eastern part of the village of Conneaut and an extensive burying ground near the Presbyterian Church, which appear to have had no connection with the burying places of the Indians.
Among the human bones found in the mounds were some belonging to men of gigantic structure.
Some of the skulls were of sufficient capacity to admit the head of an ordinary man, and jaw bones that might have been fitted over the face with equal facility; the other bones were proportionately large. 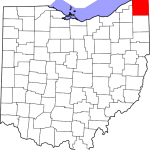 The burying ground referred to contained about four acres, and with the exception of a slight angle in conformity with the natural contour of the ground was in the form of an oblong square. It appeared to have been accurately surveyed into lots running from north to south, and exhibited all the order and propriety of arrangement deemed necessary to constitute Christian burial. On the first examination of the ground by the settlers they found it covered with the ordinary forest trees, with an opening near the center containing a single butternut.
1) Historical Collections of Ohio, Howe, Vol., 1 1847. Page 40 Ashtabula County, Ohio.

2) A Tradition of Giant’s, Ross Hamilton:

3) The History of Portage County, Ohio. Containing a History of the County, 1885 pg. 220
4) Pioneers of the Western Reserve by Harvey Rice. 1883 pg 173, GIANTS ON RECORD, Americas Hidden History, Secrets in the Mounds and the Smithsonian Files.
5) Historical Collections of Ohio, Howe, Vol. Part 1, Ashtabula County. page 93.
6) A History of Ashtabula County, Ohio, 1878.