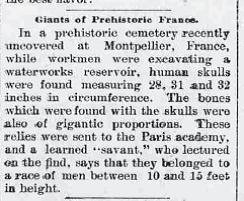 In a prehistoric cemetery recently uncovered at Montpellier, France, while workmen were excavating a waterworks reservoir, human skulls were found measuring 28, 31 and 32 inches in circumference. The bones that the workmen discovered were also of gigantic proportions. The discoveries were sent to the Paris Academy for study. One of the scientists engaged in examining the skeletons says that they belonged to a race of men who stood between 10 and 15 feet in height,”

The Oelwein Register on November 8, 1894 reported that scientists confirmed the find of a race of giants between 10 and 15 feet tall.