In the 1920’s researchers uncovered the tomb of Tutankhamen and with all the treasures of the tomb were two daggers within the folds of the mummy. One of the daggers were made of gold while the other was made of an iron mixture made before “the bronze age”.

The 34 centimeter long dagger had a iron-mixture blade with a gold handle with a crystal knob at the end. Iron is considered extremely rare in the bronze age, however this is not the case. Iron found in or before the bronze age are said to be a later inclusion or hidden away as this disrupts any evolutionary narrative. An iron dagger is claimed to be more valuable than gold but not if its commonplace.

It has been stated that this dagger as well as many other iron objects found in ancient Egypt were made from meteorites. This is just a way of explaining away the ability to use iron, or that  ancient people possessed the ability that they could work iron. It is also claimed that hieroglyphs call this “metal from the sky”  Ba-en-pet which translates possibly as metal of the sky, or ore of the heavens., . . this cannot be fully verified as a solid interpretation of the texts 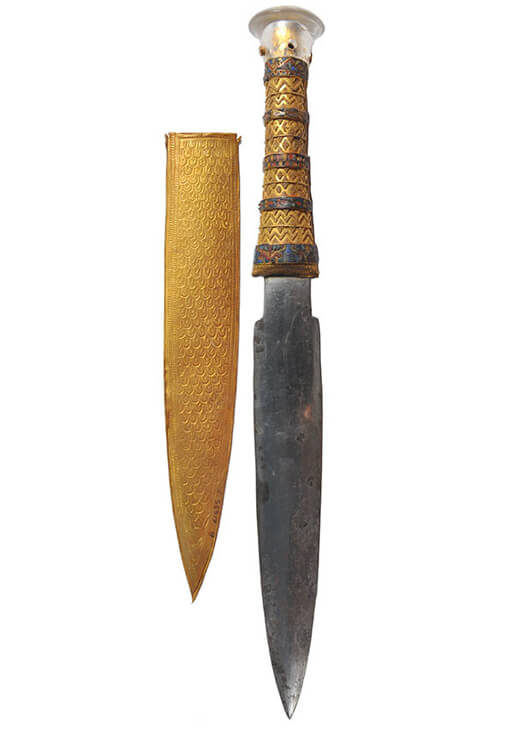 is claimed that a sample could not be taken from the dagger to prove it came from a meteorite.  Although small samples could be taken without destroying the dagger its meteoric origns in unlikely. What is likely is that the Ancient Egyptians possessed the ability to smelt iron, work iron long, long before academia is willing to accept. Artifacts produced with ordinary iron ore quarrying typically display a maximum of 4 percent nickel, however, Tut’s weapon contained nearly 11 percent nickel. the presence of cobalt, which was also identified within the dagger’s blade. The high manufacturing quality of the dagger blade compared with other simple ­shaped meteoritic iron artifacts also “suggests a significant mastery of ironworking in Tutankhamun’s time. Researchers also found that the metal’s high nickel content and levels of cobalt strongly suggest an “extraterrestrial origin.”  A more reasonable explanation is that the Ancient Egyptians are more advanced than even we are in modern times.

Scientists from Italy and Egypt used a new and non-destructive technique called xray fluorescent spectroscopy. Published in a science journal it was found that the dagger contained iron nickel and cobalt. Although it is similar to a meteor 150 miles away near Alexandria, in Mersa Matruh. it bears a strikingly similar composition to another iron object that also shows that iron is not a recent or modern metal used by man, but one that has been around. The composition is eriely similar to the London Artifact fund in London Texas. 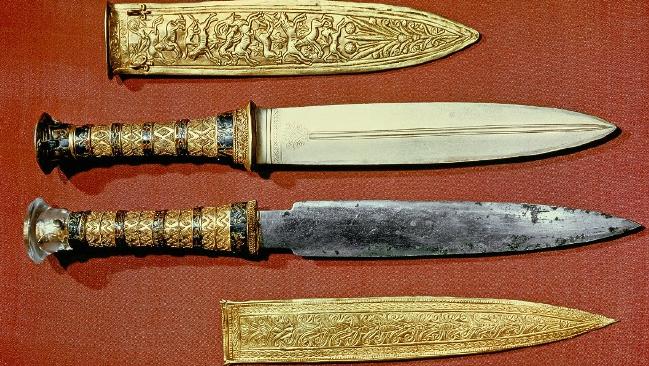 “The ancient Egyptians, in the wake of other ancient people of the Mediterranean area, were aware that these rare chunks of iron fell from the sky already in the 13th Century BC, anticipating Western culture by more than two millennia,”

“We suggest that ancient Egyptian attributed great value to meteoritic iron for the production of fine ornamental or ceremonial objects up until the 14th Century BC.”

Acram’s razor states that “the simplest solution is the best” and in all cases the implausibility of evolutionary theory is staring at you in the face. It is evolutionary theory that demands that metal is differentiated by ages, the stone age, the bronze age, and the iron age. Iron is found throughout all of mankind’s history, and in modern times people are still crafting tools out of stone. As evolutionary errors dictate iron cannot be fashioned by ancient cultures because of the pressure to prove mankind is peaking as time goes on. Quite ironic looking at the state of government and its instability throughout the world.

What modern academia is avoiding saying is: Ancient Egyptians not only were smelting and crafting Iron weapons, but were mixing very difficult metals that modern metalurgists could not fashion in modern times. It was debated for decades as academia cannot accept iron in the 13th century or maybe sooner. So . . . meteorites and aliens is the answer if all roads point to the dismantling of evolution’s storytelling of sequential ages. In fact, the ages have never been a good solution.