Modern Coyotes much smaller than the Giant Coyotes 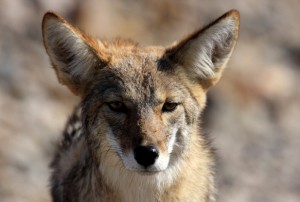 Giant Coyotes: A new fossil study of North American Ice Age coyotes finds that modern coyotes are much smaller in size today than they were several during the Ice Age. (giant coyotes)

Researchers studying museum collections of coyote skeletons. . . . . .  to the present day found the . . . . change in size and have developed several theories as to why it occurred.

“But today the upper limit of a coyote is only around 10-18 kilograms. Within just over a thousand years, they (devolved) into the smaller coyotes that we have today,” . . . .

But when they plotted body size against coldest average annual temperature for each animal’s location, they found no relationship, suggesting that climate change was unlikely to be the main factor.

If the climate hypothesis is true, then we should see similar changes in other Ice Age carnivores too, Meachen added. The researchers also studied body size over time in the coyote’s larger relative, the wolf, but they found that wolf body sizes didn’t budge.

“We’re skeptical that climate change at the end of the Pleistocene was the direct cause of the size shift in coyotes,” Meachen said.

A second possibility is that humans, believed to have arrived in North America around 13,000 years ago, selectively wiped out the bigger coyotes,. . . . (young mum affect)

or the animals coyotes depended on for food, leaving only the small to survive.

Stone tool butchery marks on Ice Age animal bones would provide a clue that human hunters had something to do with it, but the fossil record has turned up too few examples to test the idea. “Human hunting as the culprit is really hard to dispute or confirm because there’s so little data,” Meachen said.

A third, more likely explanation is a dwindling food supply and changing interactions with competitors, the researchers say. Just 1,000 years before the sudden shrinkage in coyotes, dozens of other species were wiped out in a wave of extinctions that killed off many large mammals in North America.

Until then, coyotes lived alongside a great diversity of large prey, including horses, sloths, camels, llamas and bison. “There were not only a greater diversity of prey species, but the species were also more abundant. It was a great food source,” Meachen said.

Before the die-off, coyotes also faced stiff competition for food from other large carnivores, including a bigger version of wolves living today called the dire wolf. . . . .

Results of the study are published in this week’s edition of the Proceedings of the National Academy of Sciences (PNAS).

Modern Coyotes Much Smaller Than Their Ice Age Ancestors