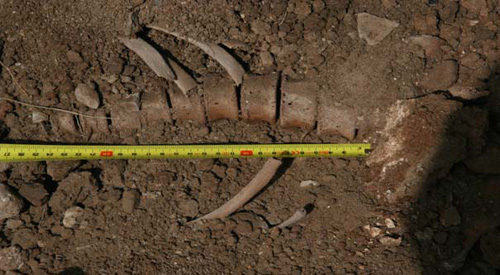 Fragments of skeleton found in the crypt of the village of Hoth.

Almost all peoples have tales about giants who lived in ancient times the territory of a country. Armenia is not an exception, but in contrast to other areas of the local stories can not be so easy to ignore. And while not all anthropologists and archaeologists believe that this is a whole race of giants, not the single tall copies, attempts are being made to find the last resting place of our distant ancestors, or the traces of their business.

Thus, during the last in 2011, the scientific and practical expedition was collected some evidence, which showed that a sufficiently large people, growing more than 2 meters inhabited parts of Armenia.

Artsrun Hovsepian, Director of the historic complex Goshavank said that in 1996, with the laying of the road through the hills were found bones of such magnitude, that when they were put to themselves, then they went to the level of the throat. Komitas Aleksanyan, a resident of Ava says that local people found the skull and leg bones of a very large size, with almost human. In his words: “One time it was last fall (2010) and 2 years ago (2009), in our village, where the tomb of Saint Barbara.”

Ruben Mnatsakanyan independent researcher mentioned in the interview for the program “City of Giants” (TV channel “Culture”) that they discovered the bones, which were very large, the length of the entire skeleton was about 4 m 10 cm “Skull I was carrying in his hand and could not see ourselves no closer than 2 meters. Such was its size. Shin was above my waist, it was about 1 meter 15 cm This bone was also not easy. ” In 1984, near the town of Goris was building a new plant. Tractors were digging the foundation. Suddenly, one of them, throwing sods stopped. Before observers to discover the ancient burial, where lay the remains of a very large man. Burial, in which lay a second giant, was the top littered with huge stones. Until the mid-rib skeleton was covered with earth, along the body had a sword in both hands, he was holding his arm, which was made of bone. Before that, I thought that the giants lived in prehistoric times. Maybe I would not have paid attention to it, but the sword was made of metal, because all along the body to keep the layer of rust, the rest of the iron.

Pavel Avetisyan – Director of the Institute of Archaeology claims that in Gyumri, near the Black Fortress, discovery of massive skull and whole skeletons of ancient period, which he showed. “I was just taken aback, because, probably, with the thumb of such a person would be thicker than my arm. I myself participated in the excavations and are often found the remains of people who were much taller than me. Similarly, of course, their growth will not name, but more than 2 meters. Because the observed tibia or hip bone, when I put it to my leg was much longer. ” 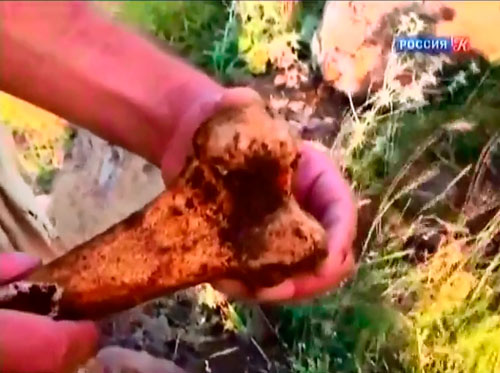 Human bone found on excavations in Armenia. Still from the film “City of Giants.” Human growth, though reached by assumption the authors, 2 meters, yet did not reach the “giant”

Movses Khorenatsi (representative of the Armenian feudal historiography, lived in the beginning of the 5-6 cc.), Wrote that the city of giants were also in the valley of the river Vorotan. This Syunik region, located in the south-east of Armenia. Here in the mountain village of Hot in 1968 built a monument to the soldiers of the Great Patriotic War. When aligned the top of the mound, the ancient tombs were opened with unusual remains. Already mentioned Vazgen Gevorgyan, “The entire population of the village of Hot Springs says it found the skeletons of giants. In particular Razmik Arakelyan many years ago during the excavation personally saw the graves of two giants. Talked about this as headman of the village, which his father showed the exact location. All who saw were very surprised how huge people once lived here. There seems to be their graveyard, and this place should be explored. ”

In the neighboring village Tandzatap also have witnesses who talked about the giant bones – tibia reaches to the waist of the highest of them. This happened in 1986, when they made terraces for fruit trees. Tractor dug up the mountainside for many feet deep. Because of this, were available very ancient layers. Bucket tractor blew a bottom plate, and then opened the burial itself, from which the extracted bone true giant. Michael Ambartsumian, while personally supervised the work.

Michael Ambartsumian, a former mayor of the village, “I saw that opened a small hole on each side laid out flat stones. There I found a leg bone from the knee to the foot, which are approximately about 1.20 cm, I even called the driver, showed him, and he was a tall guy. We tried to see what else is in the pit, but it was too deep, and it was already dark, is not visible. And we have left. Later in the same hole I found Karas, that is a huge pitcher, but, unfortunately, when you try to pull it out, it crashed. At the height of Caras reached about 2 meters. ”

Seda Akopian, resident Yeghvard mentioned that one day decided to break up the concrete floor in the balcony, under the column again to pour concrete and put a beam. When the concrete is broken, found underneath a flat stone, and under the stone was found a hole. “A skull found in a pit, one-eyed, eyes are on the forehead, mouth, and a small hole on the nose, very small. And still had legs are very long, both will probably about 3 meters. From below waist length reaches up to 3 m We got out of the pit. My husband advised, that took the find in a museum. He took the skull, and the rest do not know, carried or not. ”

With quoted the movie “City of Giants” is bound and scandal, so a leading researcher at the Institute of Archaeology of Academy of Sciences, Prof., PhD Mary B. Mednikova sent an open letter to the TV channel “Culture” and said that the film had distorted her words because it is against the existence of the “race of giants.” As a result, the transfer of broadcast television without her interview.